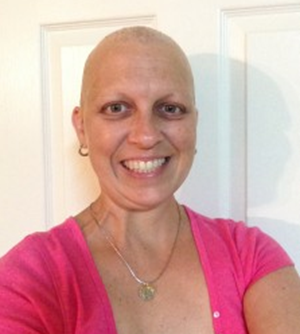 In April 2011, I found a spot on my left breast. I assumed it was just because of all the stress of looking for a new job, etc. I ignored it until October 2011, when it had grown. I went to the doctor and after a biopsy found out that I had breast cancer. I was 36 years old with a three year old and an eleven year old. I was devastated. In December 2011, I had a double mastectomy with reconstruction. In January 2012, I began my journey of chemotherapy. I did six months of chemotherapy which ended in June 2012. I continued doing my maintenance medicine, Herceptin (I am HER 2+). In August 2012, I started 35 treatments of radiation, finishing in November. In April 2013, I finished my Herceptin and had a CT scan. The CT scan came back showing spots on my chest. The doctors assumed it was scar tissue and would follow up in July with another CT scan. I am now in remission.

In June 2013, I went for my six month check up with my radiation oncologist. During this visit he found a spot on my collar bone. He immediately ordered a CT Scan. While waiting on the day for the CT scan to arrive, I went to see my surgeon (who I had not seen in over a year). We began talking and he of course asked what the latest was on me. I told him about the spot that they found on my neck. He immediately did a biopsy on it. The next day he called me with those devastating words, “Kelly, the biopsy came back and it is cancer.” For some reason this time those words took me to my knees with tears flowing!! How could this happen? I have only been in remission for two months!!!!

After meeting with my oncologist and a PET scan, I again began a journey of chemotherapy!!!  I am currently doing chemo and will have a scan done at the end of August, beginning of September to see where we are! Hopefully this scan will show NO spots!!! Pray that this treatment is working!!!

I am now a TWO time breast cancer survivor. I am only 38 years old and only 22 months out from my original diagnosis!!! But I have fought this fight and fought it LIKE A GIRL!!!!