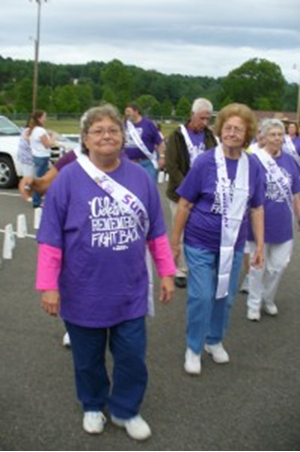 My story could be called, “What Else Ya Got?” Even before I was diagnosed with breast cancer I was also fighting fibromyalgia, osteoarthritis, scoliosis, nerve damage, degenerative disc disorder, and diabetes. One night in the middle of March 2010, I was sitting at my computer when a pain hit me, like a knife stabbing me in my side. The pain took my breath and doubled me over. My right breast was still very sore the next day at work. While telling a co-worker about the pain that I felt the night before, I felt it: A huge lump! I was encouraged to call my doctor, which I did. My doctor immediately made an appointment for me with a surgeon. She (the surgeon) ordered the mammogram and sonogram. But in my heart I already knew what the result would be.

On March 24, I got the bad news – inflammatory breast cancer. The surgeries and treatments began. Before the last chemo treatment I developed something terrible with the toes on my right foot. Tamoxifen had caused my toes to turn black. I wound up losing two toes (third & forth). In August, I had a mastectomy. On September 24, my surgeon said I was cancer free! Then in February 2011, after completing 30 radiation treatments, I started having really bad pains in my abdomen. I thought that it was just diverticulosis, which I had struggled with since my early 20’s.

Three weeks, and several trips to the doctor & emergency rooms, I was sent to a teaching hospital to find out what was wrong. A week later, I was told that I had an infection in my bowels & intestines in the e-coli family BUT they had also discovered a double aneurysm on the renal artery on my left kidney. I lost that kidney, but I LIVED! After all this in November 2011, while prepping for Thanksgiving Dinner with my family, I slipped and fell, breaking my left ankle. Because chemotherapy can cause damage to your bones, the surgeon said that he didn’t think my bones would heal. Little did he know that when leaving the hospital after surgery, I fell again, getting into my husband’s truck to go home. We found this out over a week later during a follow up visit to the surgeon. He gave me no hope for saving my leg, but did refer me to a doctor three hours away who specialized in foot and ankle surgeries. Two seeks later I was released from that hospital with an external immobilizer on my leg. I spent seven months in a wheelchair healing. Then after a couple more surgeries, I got to learn how to walk again. Finally, it’s 2013. Knock wood! I’m having a year with no overwhelming deadly diseases and hospitalizations! Wish me luck!