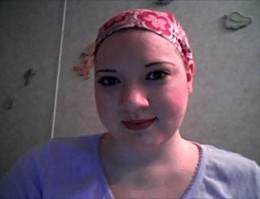 I’ve been sick, literally, since the day I was born. My real mom is an addict who couldn’t get sober while pregnant. I was born early and addicted. The drugs that sent her into labor early, also magnified a congential heart defect that runs in my family. I had open heart surgery when I was 7. And I never looked back.

I was completely unstoppable! I became trained in classical ballet. I was in jazz, tap, and gymnastics. I was so excited when I made the drill team in high school. We won awards on a national level – which allowed me to perform in the Main Street Parade of DisneyWorld, and with Dallas Cowboy Cheerleaders during half-time.

I was working as a phleb for a nearby cancer center. When the fall semester was to start, I would be there for the nursing program. It all started with one migraine headache. The next month, I had two migraines. They increased to 3 a month. Before I knew it, I was barely over one when the next would hit.

I had to leave my job. I got in to see a neurologist. He said within the first 10 minutes of our first visit that I had PseudoTumor Cerebri. I would need spinal taps done on a regular basis until I could have a shunt placed. The neurosurgeon didn’t agree. And I was sent back to the neurologist. The last time I saw him, I was in his office for yet another spinal tap. When he backed the pressure gauge off, the needle slipped. He spent more than 30 minutes trying to get the needle back into my spine. When I wouldn’t stop crying, he pulled the needle out and told me I would have to go to the hospital to have it done. When I went to the hospital to have it done under x-ray, the doctor was horrified at the lump of scar tissue that was done by the neurologist trying to force the needle back in.

When I called to find out when I was suppose to come back in, his office told me that my neurologist no longer had anything he could do for me and was dropping my case. That was the first in a long line of doctors who just gave up.

I was referred to another neurologist, who said it was seizures. He did his best, but couldn’t get them under control. So, he referred me out to a seizure specialist. She was no help at all. I went in to the hospital for a seizure study. She asked an internist to come in and make sure that everything else was ok. The internist, freaked me out by running into my room and telling me that I was in kidney failure and she was bringing in a renal specialist. She came back in the next morning and said that the renal specialist didn’t want to see me. Some of the meds that I was taking for the seizures could show abnormal kidney function. I was told to have a blood test in another week.

I went back to my second neurologist. He tried for another year or so to help in anyway that he could. But, by that time, there were so many more things that were going on. I had blurry vision. I was sick to my stomach a LOT. I had pain in my shoulders, my arms, my neck. He said that on top of seizures I had fibro.

He didn’t feel like my seizures were getting better, so I was sent to another seizure specialist. He wanted another seizure study. I went into the hospital, only to learn that the doctor who ordered the study, wouldn’t be there. I had a seizure the next day.

The head of neurology came into my room. He told me that there was no activity that showed what I had was real. He wanted me off of his floor. He was overheard in the hallway saying that he didn’t have time to deal with someone who was faking, that he had “real patients” to worry about.

I called the seizure specialist that sent me for the second study. He told me that people who have these fake seizures could also have real seizures. I needed to learn the difference. But, all he could do was prescribe medication. And since my primary was the one that prescribed that med, he thought I should stick with him.

Over the course of the past 6 six years, I have been diagnosised with 12 different diseases. None of them were correct. I have had 9 doctors drop me from their service, with 8 of them telling me that it’s all in my head.

Last January, I started getting dizzy everytime I stood up. I passed out more times than not. I had this rash that would come and go. Finally, one day while at an appointment with my primary, the rash was there. He said immediatley that I had Celiac.

Two weeks before my birthday, I had a heart attack. The day before my heart rate was too low. When I got to the hospital, it was 197. Overnight in the ICU, the lowest it ever got to was 206. I spent 4 days in the ICU while they worked on getting my heart rate stable. I was told that since I had gone gluten-free, my body was metabolizing meds differently.

Over the next few weeks, the pain spread. The rash never went away. I started having these throw up session that would last for hours. My throat would get so dry I couldn’t swallow. These sores started showing up, painful and gross looking. All I had to do was move a tiny bit, and that muscle would feel like I rubbed a tube of Icy/Hot on it. My joints started hurting. I then became so weak that I couldn’t walk on my own. I found myself in my primary’s office giving a speech that I had done so often.

I had tears streaming down my face. I begged him to believe me. I cried out for help. I sobbed to him to please help me. I am not faking, look at me, there is something wrong with me. I just want help.

He had nothing for me.

He referred me to a rheumatologist. But not before he told me that the sores were a staph infection, and the rash was hives. He didn’t give me anything for them though.

Last month, on the 28th of December, I was admitted into the hospital. I had started throwing up the day before. 12 hours later I went to the ER. I was admitted for extreme dehydration. Because my rheu is in another town, my primary was the one I saw. He told me that when I have diarrea like that, I need to keep fluids in. I told him I didn’t have diarrea. He stopped me and repeated that’s what I need to do when I have diarrea like this. He didn’t even ask why there was no hair where the sores were.

I hope. I have a beacon of light now. That light is my rheu. I have Lupus.

I am thankful to have a diagnosis. But I am blessed to know that I will no longer have to brace myself for a doctor’s appointment where I will have to beg and plead with someone to believe me.