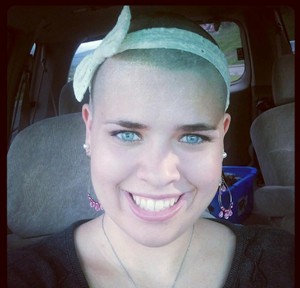 My name is Mellissa Israel. I found out I had cancer at the age of sixteen. I was diagnosed with an aggressive non soft tissue sarcoma tumor in my thigh on September 3, 2009. I found a lump on my leg one day after color guard/band practice. We went to our family doctor the next week and were told not to worry, that it was just a super bruise and that I should ice it and it would go away. Two weeks later and the lump had grown twice the size of when I found it.

My mom decided to take me back to our family doctor who immediately sent us to East Tennessee Children’s hospital. It was there that I had an ultrasound and was told that something was wrong. A week later after many tests and a biopsy I was diagnosed with cancer. At sixteen that is something that was hard for me to process. I had a port placed and began chemotherapy at once. In total I had 88 weeks or a total of 54 rounds of chemotherapy. In May of 2011, two weeks before I graduated high school I had my last chemo treatment. Two months later my MRI showed my tumor was no longer growing. A year later, April of 2012 my port line was removed. I was a survivor.

In December of 2012, I had my every three month MRI. I was feeling fine except for a little pain at the tumor site. On December 18, 2012, a year after being put into remission my MRI showed my tumor was growing again. It was decided that I would leave the children’s hospital and go to MD Anderson. I am now fighting cancer again at the young age of 20. I beat this once, I can do it again. I am so thankful I have a wonderful family and amazing friends to support me through this next battle.