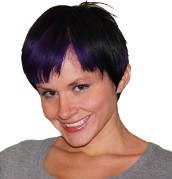 Once upon a time, I was an average, healthy 26 year-old woman. I had a part-time job at my husband’s office and I enjoyed going shopping by myself or going places with friends. I had a brand-new convertible Beetle that I loved to drive. That all changed when I began having unexplained seizures in 2005.

On an out-of-state vacation with my husband, I went to sleep with plans of visiting my grandmother the next morning. Instead, I woke up confused and afraid in a hospital bed. I had my first seizure in the hotel that evening. My husband had no idea what was going on, so he called 911 and the paramedics took me to the nearest hospital. I went into convulsions yet again once I was there. The doctors hypothesized that the seizures were due to the fact that I had been sick, taking various over-the-counter cold medications, and traveling with little sleep. They prescribed Trileptal and recommended that I get back to Florida as soon as possible and see a neurologist once I was home.

Since that initial incident, I’ve had several more seizures and partial seizures. I’ve even had panic attacks in elevators because that feeling of “going down and landing” in an elevator reminds me of the feeling I have just before a seizure begins. Fortunately, I don’t remember what goes on during the actual grand-mal seizures, but I get that “elevator feeling” right before having partial seizures. Those give me extreme confusion with an inability to speak clearly, and leave me very tired. With every incident, my doctors increased my dosage of medication because it was not controlling things well enough. My daily dose of Trileptal is now three times what it was back in 2005, but I am one of the fortunate ones. My seizures are under control with the Trileptal, but it’s a very expensive prescription and my body does not tolerate the generic version of the drug. This month’s supply cost me just under $300.

I was originally told that I should not have children due to my “condition,” but I switched to a new neurosurgeon that told me otherwise. I have a beautiful, healthy one-year old and I have been seizure-free for two years.

I had my first seizure when I was home from college for my father’s funeral. …