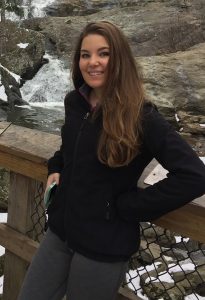 As an 18-year-old, I began my freshman year of college thinking my biggest challenge would be my biology class or getting along with my roommate. I never would’ve thought that my biggest obstacle would be a papillary carcinoma diagnosis. Living the typical “college lifestyle” left me with colds left and right. I went to my primary care doctor over Thanksgiving break, and she felt my thyroid was “enlarged” after preforming a routine neck exam. She suggested an ultrasound once I was home again for winter break.

An ultrasound led to a fine needle aspiration, which led to a diagnosis on January 11, 2016. On January 20, 2016 I had a total thyroidectomy and lymph dissection. Fast forward to summer, and I had struggled through the limiting low-iodine diet and undergone a significant dose of I-131 that wreaked havoc on my digestive system and sense of taste. Life went on, and we waited for more tests, more low-iodine diets, and more answers. I made it through school the previous year, but had to put it on hold for the fall semester while we sorted everything out. I ended up having another lymph dissection, with about 35 nodes removed and 5 affected.

Thyroglobulin is a protein made by thyroid cells and is used as a marker to determine how much disease/tissue still exists. My thyroglobulin levels, beginning at somewhere around 800 ng/mL, finally dropped into single digits. At this point it became ~8 ng/mL but recently rose to ~14 ng/mL. This doesn’t mean much in the grand scheme, considering we began in the hundreds, but it’s time to decide the next move. My doctor wants it <1 ng/mL. We decided to plan surgery for next month and then more RAI in the winter, but treatment should be completed by next year, and I couldn’t be any more excited. It’s a goal I’ll do just about anything to reach.