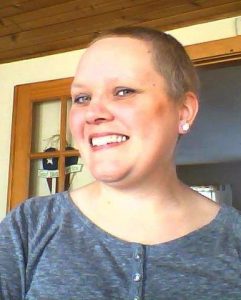 On June 20, 2013, I was diagnosed with Stage 3 HER2+ Breast Cancer. On July 15, I started 16 rounds of chemotherapy. I had four rounds of dense chemo, and then I had another 12 rounds of Taxol. The week of Thanksgiving was my last chemo. Four days after my 40th birthday in December, I had a bilateral mastectomy. And because of the blood clot that had formed during chemo, I bled a lot and was kept in the hospital for a week, when I should have been out the next day.

Two days after Christmas, I got the pathology report that all my margins were clear. This was great news. In April, I started my first round of radiation. I went daily for 28 treatments. During Taxol treatments, I started Herceptin treatments, which was a 52-week therapy for my kind of breast cancer. It was once every three weeks. In September of that same year, 2014, I had my port removed, or else I would’ve had to flush it every so often.

In October of that same year, I went through more breast surgery to make me whole again. Since then, I have had several other surgeries, or what my plastic surgeon calls “routine maintenance.” I go every 6 months for lab work and follow-ups with my oncologist. This December will mark 4 years!