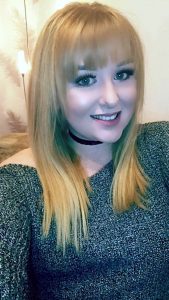 It all started during my teenage years, around the age of 15. My periods were never regular. They came maybe once every couple of months and lasted more than usual, sometimes a full month. So after a trip to the doctor’s, they prescribed me a contraceptive pill to help regulate my body. This pill helped awhile, until I forgot to take it and got a boyfriend, who was, at the time, kind of serious. So I took a trip back to the doctor’s to get something more permanent. I went on the injection, and after the first two, the problems started.

After a day at school, I came home in absolute agony. The pain came from nowhere and knocked me to the floor of the kitchen in tears. My mum came back from work to find me in this state and rushed out to get me some Feminax and a hot water bottle. During my time on the injection, we noticed my periods had stopped fully, which at the time, seemed like a godsend. But I was still getting the pain, and my stomach would swell so much I looked pregnant.

A few months went by, and the weight gain got me. The pain became like a dull ache nearly every week, and over time, I became used to that and saw it as normal.
It wasn’t until I was at Rob’s (my boyfriend at the time) house, and I woke up in absolute agony and couldn’t move at all. The pain made it unbearable. I was in tears and feeling sick, so we went to the hospital, where they said I probably just had gastroenteritis and sent me on my way, after seeing that I had managed to keep toast down.

I was fine for a few more months, still getting the dull aches and pains, but nothing too harsh, until another episode of the excruciating pain and another trip to the hospital where they thought nothing of it. I still wasn’t having my periods and was continuing to take the injection.

Christmas Eve of 2011, I woke up normal and felt really bloated, but I just thought it would pass. I went upstairs to get ready, and all of a sudden, I was leaning over the toilet, crying, unable to move and sick. Rob called my mum and told her I was in this pain again, so she came to collect me and took me to Urgent Care, where we got a doctor who actually looked through my past history and saw these visits were pretty frequent. He said it was either kidney stones or polycystic ovarian syndrome. Me and my mum sat, waiting for the results to come back. No kidney stones were present, so he said we should see my doctor and get referred to a gynaecologist.

The doctor saw me straight away, and I had an ultrasound booked in for the February of 2012. I genuinely remember that day like it was yesterday. My brother took me and my mum into the ultrasound place, and I had to go for the scan on my own. I was petrified, and my mother wasn’t allowed in the room with me. They put the cold stuff on my stomach and ran the thing over me and said, “Yeah, your right ovary is covered, and your left one has a few, but not as many. You definitely have PCOS.” They wiped me up and sent me out of the room. It took one look from my mum and brother, and I broke down in tears. Imagine telling a young girl that, like it’s nothing, it’s completely fine. I went to bathroom, and when I came back, my mum and brother had gone to them to tell them how unhappy and angry they were. The nurses took us back into the room and explained a few things, but the one that sticks to mind is, “You may never have children.”

I went to the gynaecologist, and she said I looked pretty good to say I had PCOS. What does that even mean? I don’t have facial hair, my acne isn’t bad and the weight gain isn’t massive, but I felt terrible. The lady was lovely and wanted to try a few different contraceptive methods to get my periods to regulate and make sure they worked. It wasn’t like magic. I still suffered from the weight gain and the dull aching pains. On top of that, I developed anxiety and depression (this wasn’t just due to the PCOS). I was unhappy with everything, so I began going to the gym, and it helped for a while. I came out of a bad relationship and off the depression and anxiety medication.

Fast forward to 2016, and my body had become so used to the pill that my cycle messed up again, so I took a trip to the doctor to change it again. The doctor put me on another pill, and it seemed to be working. I went off to America to work at a summer camp, and some of the weight came off. But I was getting terrible migraines, and the pains were a bit worse than the normal dull aches I got at that time of the month. I’d gone back to see my doctor at the end of 2016, and she said to finish the month and then come off it altogether to see how my body would react and if my cycle would continue as normal. It hasn’t. The pains are excruciating again, but now, not even at the time of the month, just whenever my body feels like it, I guess. My body bloats just like it used to, I’m tired all the time and my acne is awful.

I have moments where I just want to cry and sleep for days, but I know I’m not the only one with PCOS. There are so many woman and girls out there that struggle daily with this battle, and it is tough. But for us, it kind of becomes normal. I’ve learnt to block the dull aches out, and when the excruciating pain hits, I’ve found that taking deep breaths, hot water bottles and strong paracetamol or ibuprofen dull it down. But it never goes completely.