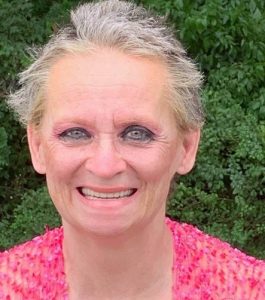 On March 27, 2000, at the age of 33, I found a lump. At first, I wasn’t going to say anything to anyone, but my gut told me otherwise. I told my mom and sister they had me call my OBGYN. I was able to get in to see the doctor on March 29, 2000, and I owe my life to him. He did not feel the lump but instead of saying, “If you think you still feel it in in 6 months, come back,” (because I’d have been dead within those 6 months) he scheduled a mammogram for the same day. It did not show on the regular view, but it showed on the cone view and was confirmed.

On March 30, 2000, I was scheduled for an ultrasound and then on March 31, 2000, I was told they confirmed the lump was solid not fluid which almost always means cancer. The tumor was 1.5cm and on April 4, I was told I had breast cancer. My surgeon told us he had never in all his years gotten back such a strong biopsy for cancer. After giving us that information, my surgeon gave me my choice of a lumpectomy or mastectomy. He said the chances of living 5 years was almost the same percent: I chose a mastectomy. My surgeon was surprised; he said most my age wouldn’t have made that choice because of their looks. I told him I didn’t care about that, I was more concerned about having 3 small children at home; ages 14, 9 and 8.

On April 17, 2000, I had a modified radical mastectomy. They did the lymph node test before surgery with the dye. When the pathology report came back it was bad: Stage 3A, Grade 3 TNBC W/8 of 12 positive lymph nodes. The cancer was all throughout the breast tissue and I was left with the thinnest layer of tissue possible, which is hard to describe given none of you can see my chest or side ribs. My collarbone sticks out on the side of my body that had cancer. My armpit was scraped out of tissue so bad it’s concaved like a big crater hole. My surgeon said I made the right choice. Had I not, he would have had to take me back to surgery for the mastectomy.

On May 16, I started my chemo treatments: Dose-dense Adriamycin and Cytoxan.  I had both on the same day; one after the other. Then after those drug treatments, I was given Taxotere. On November 20, I started the first of 29 rounds of radiation then I had 5 rounds of an extra boost of radiation at my incision.

Back in 2000, they didn’t offer the option of having the other breast removed by mastectomy during the one for cancer, so I asked for the other post-op treatments.  My surgeon didn’t want to but I insisted:  it’s my body and it’s what I wanted and I didn’t let up till he said yes.

I lied to get a full hysterectomy in 2003.  Again, back then they didn’t do things like they do today, so in 2009 I had the genetic testing and I am BRCA 1 positive and passed it to my youngest son. After I got those test results back, I was ever so grateful that I stood my ground with the other mastectomy and lied to get the full hysterectomy.

This past April 17, 2019, I celebrated my 19th “cancer-versary” and in July I turned 53 yrs. of age.  I am a grandmother, and I just got to see my daughter get married.  Other than lots of side effects from chemo, radiation, and horrible chemo brain, I’m healthy.

The last 17 years after I completed my surgeries, chemo, and radiation, I’ve advocated everything breast cancer.  First, you should start with “trust your instincts/gut.”  Do not let ANYONE change your mind!  I had a few signs alerting me to the seriousness of my cancer starting with me finding it.  Second, was my gut telling me I needed to tell my mom and sister, and third was my OBGYN doing the mammogram when he didn’t feel it was necessary since I was only 33 yrs. of age.  Fourth, which is I think the most important:   The day I had the biopsy I was just supposed to talk with the surgeon and set up the biopsy.  I was going to the appointment by myself but at the last minute, my sister went with me.  Thank God, since he did the biopsy that day.  To me, that was a huge sign that the cancer was bad– not far off from stage IV– that we needed to know ASAP.  Finally, the last sign:  It was only 10 days later from the biopsy that I had my mastectomy.

I talk to everyone about self-breast exams, mammograms, BRCA testing (which lets you know that you can also pass the BRCA genes to your daughters AND sons), male breast cancer, reconstruction, and chest tattooing (as an option, not just nipple tattooing).

I joined a support group named, “They had none when I was diagnosed” to give encouragement.   I go to the breast cancer walks, tea’s, picnics, basketball games–everything.  I even let people touch my breast when they’ve asked, or have seen my breast when I’m showing them my tattoo. I helped a fellow sister by paying to get her chest tattooed.  I’ve sent sisters pink ribbon gifts on support groups or on Facebook to give them a little surprise and a smile.

Well, that’s my story and I better end it because I can go on and on.