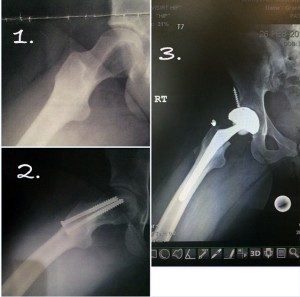 My name is Lindsey, and I’m 18 years old. It all started four years ago, my freshman year in high school. I had decided to join a weightlifting class to try to get into shape for the summer. It was January, and summer was right around the corner. We began running one mile every day. We had to finish it in a certain amount of time every day, and that time length got shorter as the days went by to push us to finish faster. After a few days, I started getting this pain in my right hip. I couldn’t run. My leg wanted to just give out, and I didn’t understand why. At first, I wrote it off, as I had never really been the athletic type, and the workouts were just doing their job, and I was sore.

Eventually, we started doing squats with weights. I couldn’t do it. I tried with just the bar, but once I got down far enough, my legs would just give out. So they had me try it with a broom. Same thing. I was so embarrassed because everyone else was able to do it while I did wall chairs the whole period, and that was still a challenge. The coach finally realized that it looked like my hip was making a weird movement when I ran, so he suggested that it was possibly dislocated. He told me to make a doctor’s appointment to get it looked at. I told my mom, and being the mom she is, she told me, “It’s probably just muscle aches, but we’ll get you in just to clear your mind.” I’ve never been the kid to be sick all the time, and my mom’s never taken us to the doctor if we were just coughing, only if it was serious, and she felt like we were in need of it.

Anyway, the appointment time came, and they gave me an x-ray of my hips. I was called into a room, and we sat and waited for the doctor to come in. After about 30 minutes, the doctor came in and pulled the x-rays up on the screen. She said, “Well, this is what a normal hip looks like.” And she pulled up the x-ray of my left hip. Then she said, “And this is what your hip looks like.” And she pulled up my right hip up on the screen. I was confused, and the she pointed out the grey spot covering my entire femoral head. She said, “This is an unknown lesion (mass), and this could very possibly be cancer.” I didn’t really know what to say, so I just sat there. Of course, my mom was super upset, and she didn’t know what to do, so she just cried, which if I was a mom, I would do too.

I was immediately set up with an appointment at the local imaging place to get an MRI and find out if it was a cyst or tumor or what it was. I remember sitting in the MRI machine and just thinking, “Is this really happening?” Everything happened so quickly though. I was set up with an appointment with an oncologist at Arnold Palmer, which I thankfully live about 45 minutes away from. He looked over the CD and said that it was definitely a tumor, and then I was referred to an orthopedic oncologist in Tampa that week. As soon as we started talking with him, he started taking about going in for a biopsy, and if was cancer, he would sew up the small hole, and I would start treatment. But if it was benign, he would remove it and give me a partial hip replacement, since it had literally eaten almost my entire femoral head.

About two weeks later, I had my surgery. He did the biopsy, and the results made plans change. It came out that I had a rare tumor named a “giant cell tumor.” It’s usually only seen in women between 30 and 40, and the chances of someone getting it is literally one in a million, especially in the spot that I got mine. They removed what they could of the tumor. To shorten this story up, it ended up coming back a year later, and I had it removed again. Then it returned the following year again, and I had it removed a third time. This past year, it returned again, and they decided to give me a full hip replacement. I embrace the fact that I’m considered one in a million, and it’s makes me feel good to know that I’ve defeated Giant Cell. This year will be five years of me living with Giant Cell.