A year ago today, I went for my end of treatment PET scan, which would go on to show that I had reached remission. As I’m sure you can imagine, the relief was wonderful. After seven long months, to find out that I had the all clear was the best news we could have hoped for. Life could move on. We could get on and do things we wanted to do. I could carry on being a mummy to my 18 month old son.

Then of course, I found out I had thyroid cancer, and for a while, health issues came first once more, and I had to have various surgeries to get that fixed.

In April, I got the all clear from that too, albeit, two days after an early miscarriage.

However, I got on with things, even though it was hard, even though I was devastated at my loss, and so fed up that things just didn’t seem to go right for me.

Four long months later, and my son has something he’d like to tell you: 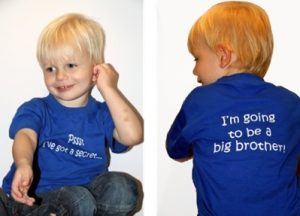 So, please forgive me for being quiet over here. It has been so hard to keep this a secret until we knew everything was OK. But, so far it all seems to be, and baby number 2 should be with us in the middle of April next year.

So, you see. Life really can move on.