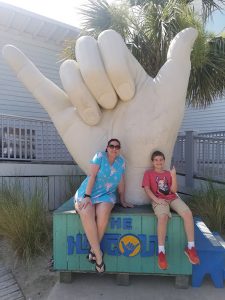 I’ve always been told I could never have kids because I was sexually abused as a child–brutally–to be honest.

About 10 years ago, I got bit at the same time on my leg by three brown recluse spiders and ended getting a staph infection in my leg and it spread to my brain.

I was in and out of the hospital pretty much for about 1 yr. and I was on so many medications and steroids trying to keep me alive. They told me I was going to die, and it kept spreading. I went from weighing 140 lb.s to 287 lbs. because of the steroids ‘keeping my heart going but I was in a hospital bed.

Finally, I was able to get out and started feeling better, but 2 months later I started to get sick again. They thought it might be a staph infection again, but I found out I was pregnant with my son. I was always told I would never have kids and I had done fertility treatments as well as so much more to get pregnant with my ex–but it never happened. Now with my new husband–it happened! I was told to terminate because it wasn’t a natural pregnancy and I would die or get cancer. I told them, “No.” Ten and a half months later (yes, I went 10-1/2 months being pregnant) my son was born.

I did end up getting cancer in my ovaries and one of my ovaries ruptured. An infection set in and I ended up with cervical cancer. They did a hysterectomy but then the cancer moved to my stomach and then to my bones.

I’ve had to do rounds of CG-MED monthly, cancer pills, and radiation on and off for 8 years. It will go away and come right back. I now have thyroid cancer which is eating my thyroid and I’m on tons of meds, but I would never trade my son–he keeps me going. Even if I knew I had to go through all of this I would always choose my son.

I now have an 8-year old miracle baby named Uriah, and I love him more than anything. He’s my reason for fighting and I truly believe I was meant to be his mom.

See, I have no family. I was taken as a child and raised by the state and DHR, raised in group homes, and foster care.

My son is my whole world and I will continue to fight because his smile and happiness at the end of the day will always keep me fighting. #willalwaysfightlikeagirl