Lauren’s Fight Like a Girl Story (Rheumatoid Arthritis and Fibromyalgia) 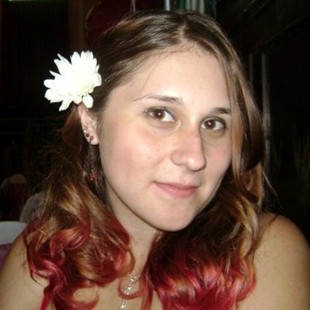 I wasn’t even 21 when my dad passed away in 2008. Less than a month later I was battling crippling pain in my hip. I had surgery on it in 2009, without a definitive diagnosis to what was actually causing my pain. To this day I still only know it was an extra piece of bone sticking out and damaging my hip capsule.

Less than 6 months after the surgery the same pain was back. I’ve been walking with a cane since 2008, but the pain got so bad at the end of 2009 that I was forced to use crutches. At the same time my back gave out. The doctors said I had two bulging discs and the spine of a 65 year old.

In 2010, I was faced with pain everywhere. Crippling, burning pain in my hands, feet, shoulders, almost every joint. It was as if someone had taken a bat to every joint in my body. Especially my hip. My hip was worse. It took the doctors until January of 2011 to discover I had early onset Rheumatoid Arthritis. I was 24.

RA kind of ran in my family. A few of my dad’s aunts had it.  It took the doctors so long to diagnose RA because I was the 20% that didn’t have the RH factor in my blood tests, but all my symptoms fit.

I got started on methotrexate just after I graduated. I started nursing school in February of 2012. It worked at first. Then about 3 months in I was in terrible pain again. It didn’t feel quite the same as a flare and my doctor told me it was probably Fibromyalgia. He started me on Neurotin. I started to feel better.

After a particularly grueling clinical, my back completely gave out on me. The ER doctors told me I had to take it easy or I could not be walking because the bulging discs were pushing hard on my spine. So I was forced to put nursing school on the back burner until I can get my back fixed.

Just 2 weeks ago my hip finally gave way and I fell. More than once. The pain has been unbearable lately and I’m trying to get Medicaid so I can see the doctor. I’ve been keeping myself busy making quilts, and little video game dolls. The flares of RA and Fibromyalgia still come and go. Some are worse than others. Some days I feel amazing. Almost like how I felt before my hip gave out. Some day I don’t even want to get out of bed.

Every day I fight just to walk to the kitchen or bathroom. I keep going because I want to get my B.S. in Nursing and someday my Master’s. I fight because I want to finish my novel of short stories. I fight for for my mom, for my 85 year old grandmother, for my sister. I fight for them because they too are battling painful, crippling diseases. I fight for my dad who fought for a long, long time. We are a family of fighters. It’s probably where I got it from.