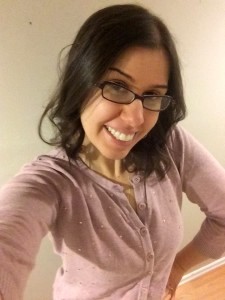 This will be a shortened version of what I’ve been through this past year.

In May 2014, at the age of 24 (I’m now 25), I was diagnosed with stage 1 B1 cervical cancer. The doctors kept telling me how rare it was for someone my age, and a non-smoker, to have cervical cancer, but there it was. I had an MRI and a PET scan, which showed the tumor was almost 3cm. I was given 2 options. I could have chemo to shrink the tumor and then they could do surgery to remove my cervix, or I could have a radical hysterectomy to remove my cervix, uterus, tubes, the top 1 cm of my vagina and some lymph nodes. I was devastated because I have always wanted children, and I did not want to lose my ability to have children. I was told that if I chose the first option, I could still get pregnant, although it would be more difficult and there would be a high risk of miscarriage during the second trimester. I decided to go with option 2 because I really wanted to avoid doing chemo (since it is poison) and because even if I had gone with option 1, there were no guarantees I would be able to get pregnant. With the radical hysterectomy, I would still be keeping my ovaries and would have the option of having a biological child through surrogacy. The thought of losing the ability to carry my own child was upsetting, but I knew I had to take care of myself and get rid of this cancer.

Before my surgery, my husband, who is in the military, was sent to do a course in Ontario (we were currently living in Edmonton, Alberta) for 4 months, but my mom had come to Edmonton to be with me and help me with my recovery.

On June 26,2014, I had my radical hysterectomy. They performed the surgery with the Da Vinci Robot, so they only had to make 5 small incisions on my abdomen, which made for a quicker recovery time. I spent 1 night in the hospital and then went home the following day. I had to keep the catheter in for an additional 5 days. After a few weeks, I was feeling almost back to normal. I went to see my oncologist for a check up at the end of July, and she told me that my lymph nodes were negative and everything looked good. She said she wanted to see me in November for my next check up. So my mom and I packed up the car and drove to Ontario so I could spend some time with my husband and the rest of my family (who all live in Ontario).

A week after arriving in Ontario, my oncologist called to tell me that there was a mistake on my pathology report, and she now knew that there were a lot of cancer cells in my bloodstream. She advised me to fly back to Edmonton right away so I could start chemo and radiation. I was so upset because I had only chosen to do the radical hysterectomy in order to avoid chemo and radiation. I told her I didn’t want to, nor did I have the funds to head back to Edmonton right away. I also wanted to look into alternatives. She said she would get me in touch with an oncologist in Toronto, Ontario, who specializes in cervical cancer, and in the mean time, I went to see a naturopath in Ottawa at a cancer centre.

The naturopath suggested I take a variety of supplements and suggested what foods I should and should not eat. After a month of waiting, I got in to see the oncologist in Ontario. He looked over my pathology report and did an exam. He wasn’t convinced I needed any more treatment but said he wanted to have my slides sent from Edmonton so he could do a new pathology report (since the one in Edmonton had been done poorly). In October, I saw the Toronto oncologist again, and he said that he thought I was at a slightly higher risk and that I should do some radiation. At this point, I was fed up with doctors and felt like it was all a bunch of guess work. I was told that I only had a 20-30% chance that the cancer would come back and I thought that since I was young and healthy, I had better odds than that.

In November, my husband and I drove back to Edmonton, and on the 26th, I went back to see my original oncologist. She told me she was 99.9% sure the cancer had come back. She was shocked it had come back so quickly though. I went for another MRI and a PET scan that confirmed that I had a tumor that was 3cm at the top of my vagina. I was told I would have to do chemo and radiation. I asked if I could harvest my eggs first and was told that it wasn’t possible because of the placement of the tumor. With no other options, I agreed to do the chemo and radiation, even though I knew it would destroy any chance of me being able to have a biological child. I did chemo and radiation at the same time. Monday through Friday I would do radiation, and every Tuesday I went for chemo. I had 5 rounds of chemo and 28 rounds of radiation. I was lucky to have very few side effects. I had some ringing in my ears, and I felt more tired then usual, but that’s pretty much all.

My treatment ended on January 23, 2015. I had an exam, and the oncologist said they could still see and feel the tumor, but asked me to come back in 2 weeks because the tumor should shrink more during that time. I went back today, February 4, 2015, and I was told that it looked much better then it did 2 weeks ago, but they think I should do more chemo to make sure they get all of the cancer cells. They are afraid there could be more floating around in my body. I have to go back next Wednesday to get more details about the chemo plan. I’m a bit nervous because the last chemo I did was mild because I was doing it at the same time as radiation. Since it was mild, I didn’t lose my hair. This time they are talking about doing a more harsh chemo, and I am worried that I will look and feel sick. I’m hoping they will let me go home to Ontario to do this chemo because that is where my whole family is, and my husband’s work has agreed to transfer him to a base in Ontario if the doctors give me the OK. I’m anxious to hear what the oncologist has to say next week.