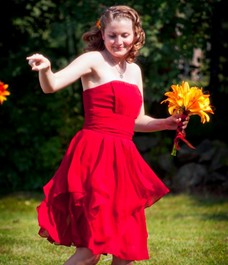 In 2000, when I was 13 years old, I was running pre-season for cross country…my FIRST year in high school!!! During a practice, I twisted my ankle, but finished the practice before finding the athletic trainer and talking with him. He told me to get an x-ray and stay off of it for a week before trying to run again.

The x-ray came back negative and I began high school on crutches, just as I was told. A week later, the pain was worse, NOT better. I went through a series of MRIs, more x-rays, bone scans, etc. Nothing was coming back with any reason as to why I was in pain. I now felt as though I was on fire, my foot was swollen, and quite discolored.

After about 3 months, my pediatrician ran out of ideas and sent me to a pediatric orthopedic about an hour away. After talking with me, my mom, and looking at my foot for about 5 minutes, he diagnosed me: Reflex Sympathetic Dystrophy. That’s quite a mouthful of jumbled words with ZERO meaning for someone so young. He explained it to me that, yes, I was initially hurt and feeling pain as I should have after twisting my ankle. However, once my ankle healed, my brain was still sending pain signals to my foot, telling me that I was still hurting.

I started seeing a neurologist who had just moved into the state. He had experience working with adults with RSD and was interested to take on a pediatric. I went through months of med changes, epidurals, more meds. I remember VERY little of my freshman year due to the medication I was on.  At one point, I was even using morphine lollipops! My mom, being a teacher, worked with the school to get the accommodations that I needed, including more time to finish assignments and taking exams at home with my mom sitting there with me to make sure I didn’t cheat. I would only be in school a couple of hours a day, for only a couple days a week. I was taken out of school to do water therapy as it was only offered during the school day.

I was sent to Boston Children’s Hospital for a week-long epidural treatment/program. Once the epidural was implanted, I walked with a PT for the first time in MONTHS. I even walked on a treadmill for .5 miles! I was EXHAUSTED after each walk, as I had lost so much muscle mass in my left leg, that I was very weak. However, towards the end of the week, the epidural shifted in my back, and the medication no longer was being sent to my leg. The RSD pains came back full-force. I had been hoping to walk out of that hospital, but instead, I was wheeled out to the car in a hospital wheelchair.

After that, my neurologist told me that the only way I would be able to walk or run again, was to just do it. I began this journey of walking again by standing with my crutches, and just touching my foot to the ground (not even any weight on it), for 10 seconds a day. Then I would put a little weight on it, then I got to the point where I could walk with crutches for a few minutes at a time. It was the most grueling of tasks, but by the end of my freshman year of high school, I was walking again, WITHOUT crutches!

By my junior year, my doctors all agreed that I could try running again. My senior year I ran on my xc team, and finished second for my team at States, and then ran the junior olympics out to New Mexico for Nationals! In college my sophomore year, my friends and I completed a half marathon! I would send my neurologist photos of each race to show him how awesome I was doing!

While training for another half marathon the following Fall, I was doing a fieldwork for a class, and a powered wheelchair ran over my RSD foot and stopped on it. Within 5 hours, I knew that I had relapsed due to the burning pain and sheer agony that I was in. My neurologist took me in the following week, and decided to do sympathetic blocks. Over a few weeks, I had two. With a change in pain meds, combined with the injections, I was back in remission by the time second semester started that year.

I graduated from UNH in 2008 in fantastic health. I got a job working in my field, and was making great new friends, and starting my life! In 2010 I started grad school for OT. This past summer, July 2011, I relapsed again, seemingly out of nowhere! The RSD has quickly spread up to my knee, and I am on a cocktail of medication. My night stand looks like a pharmacy! I have had to make the tough decision to take this Fall semester off from school to focus on my health. I struggled with this decision for a couple of weeks, but my school advisor reminded me: ”you can’t help other people until you help yourself.” Her words are staying with me this week, as classes have begun, and I’ve been home trying to get better, going to PT appointments, and getting my medications changed, yet again!

I’m hopeful that the new treatments that will be starting in the next couple of months will help put me back in remission. Until then, I will keep repeating her words to myself. I can’t be an effective OT if my health is terrible as well. This is the time for me to be selfish, and focus on ME and MY recovery. I think that following those words will help me to become a better OT in the future! Now is the time to help MYSELF, so I can make other people feel better.

It is a fight and a struggle every single day, to walk on a leg that feels as though it is on fire. It is a fight to focus on the end goal, through the haze of my medications. But I’m doing it. I’m fighting RSD back. This monster won’t win against me…I will go into remission again!
(Photo: DANCING down the aisle 9/3/11 in my friends’ wedding. I was in a TON of pain, but it was worth it to be able to celebrate the love of my friends!)