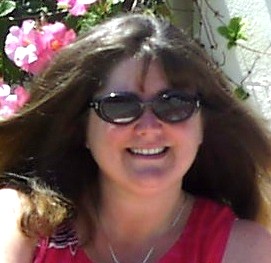 I started my period one week after my 12th birthday, and they started right away with shooting pain down my left leg and unbearable cramps. I passed out in school from the pain three times before they got me on pain medication. I just figured I was one of the unlucky ones. I didn’t realize what was in store for me.

In 1980, I married at 19 years old, and shortly thereafter, got pregnant. Unfortunately, they quickly discovered that my right ovary was the size of an orange, and then a week later, the size of a grapefruit. I was informed that it was most likely ovarian cancer and that I would have to have a therapeutic abortion and be scheduled for major surgery.

Ultrasound was not being used yet, and when they opened me up, they found that it was my left ovary, and it was the size of an eggplant. It was full of endometrial tissue. My Fallopian tube was eaten up, and my uterus was bicornuate, and half of it was rudimentary tissue. I was opened up from hip down to hip bone and then told that I would have a very difficult time carrying a child, if it was possible at all. I would have to start my family now if I was to have a chance at all.

I was determined to be a mother!! I gave birth to my son by way of C-section, due to him being head-up, in 1982. My daughter came in 1986 after five miscarriages. All in all, I was pregnant 9 times with 2 children and 7 miscarriages.

In 1995, the pain due to the endometriosis was getting so much worse! The doctors determined that it was time for a hysterectomy. When they went in, they found endometriosis wrapped around my left sciatic nerve, my colon, and pretty much everywhere. When it was sent to the lab, it came back as endometriosis that had progressed to adenomyosis.