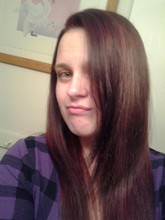 It started after 8th grade (13 years old or around there). My stomach was always hurting. My periods started in 2004 so not long after that I started getting all this pain and nausea. I went to my family Dr and she did some tests and thought it was a food allergy but no matter if I ate or didn’t eat I still had pain, so I was referred to a gastro Dr and I was put on sooo many pills and I have had as of today 3 endoscopies and 2 colonoscopies. I have also had a small bowel follow-through(they make you drink this white stuff and it highlights the bowels to see if there are any blockages or anything). They didn’t find anything with any of the first test set of tests. I’ve also had a ton of blood work done. I was almost diagnosed with Crohn’s disease but no matter what pills I went on it didn’t help, so a few or so years went by and I was still having pains so we (my mom and I) finally went to a ob/gyn and he had his ultrasound tech do an internal ultrasound and he did a pelvic exam and he said I have endometriosis. I didn’t know what it was and I don’t know if I asked him what it was. I was just, like, okay. Now I know what I have. How do we treat it? He put me on birth control and told me to give it a month and I should see a difference. I did and it was a relief that we finally figured out what I had. It got so bad before that that it got to the point where I dropped out of high school in my sophomore year (my class graduated in 2009, so I’m not sure how old I was but it was in 2006 or 2007).

But I was still having pains every now and then and it got to the point where in April 2011 I went in to see my doctor again and he said that we need to go in and take a look around. At that time I was working so I had to take a leave of absence from work and my surgery was scheduled for April 18th, 2011. I had stage 2 endometriosis and he burned off everything he found. He said it was all on the back side of my uterus and my ovaries were fine. I could still have kids if I wanted to.
After I healed from the surgery, I was okay until September 17, 2011 when the pain came back with a vengeance. I was SUPER nauseated so I waited it out to see what it might be but I finally went to my family doctor (which is a different one from when I was younger) and he did some tests and asked questions and I had an ultrasound done to see if everything was the way it was supposed to be. We thought it was my gallbladder because my uncle, grandma, mom, and brother had had theirs taken out but my gallbladder was fine and it didn’t hurt after I ate a big meal (he wanted me to try to see if it did).

I was still having pain so I called him back and he ordered an endoscopy which I had done on December 12, 2011. In my stomach, there was an area that was red, swollen, and inflamed so the doctor performing the procedure took a biopsy. It came back negative for h. pylori but he gave me some pills that helped and I took them all (once a day) until they were gone (they are now gone).

I went back to my ob/gyn in December 6, 2011 as well and he put me on a different birth control pill and I’ve been having a lot of pain since then, not sure if my body just needs to get used to the new pill or if my body doesn’t like beyaz (the BC pill he put me on). The plan now is for me to try this new pill and not have a period for 3 months ( I have one every 3 months) hasn’t been 3 months yet, almost done with my first pack and still in pain. He wants me to come back in 6 months so when all my samples are gone that he gave me and go from there or before that if the pain gets really bad. We also talked about the IUD Mirena and he said he has had some success with his Endo patients and I wouldn’t mind trying it, it’s just the out of pocket cost that I can’t afford. I haven’t called him because i’m not sure if it’s from the bc pill that is causing so much pain or what. I called him Jan 2012 and i’m now on a new pill that I have been taking now and I think it’s helping with the pain. I still have pain but not as bad as with the Beyaz. The new pill is loesterin24Fe. I’ve also been drinking a lot of water which I have found that helps a little with what I eat, I no longer like fast food places.
It’s affected me emotionally, physically and sometimes mentally. I have issues with my family members. Some don’t understand and some are trying to understand. I haven’t dated a lot cause of the pain and afraid that i may not find someone that will be able to handle it. It has put a damper on my social life as well but i am trying to get everything back on track.
I don’t have anything else that i know of besides endo. I think i have chronic fatigue syndrome but i haven’t been diagnosed with it.