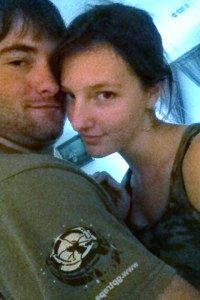 I am 19 years old. I thought I was pretty healthy, but when I first started to feel it coming on a few months ago, I was horrified. I thought I had overdosed on nicotine, so I quit smoking. When that didn’t work, I thought I was pregnant cuz I was getting so nauseous. Then it turned out not to be that either. I had already gone to the doctor for a blood pregnancy test. It came back negative.

So I went to the doctor’s, again. They did a pelvic exam and blood work. Everything came back normal. So I went home, thinking I just was sick. Then I quit eating so much food and tried to go for easily digestible foods like soup. I was also getting very dehydrated. I went back to the doctor’s when nothing was working. They couldn’t find anything wrong and thought that I just had acid reflux. They gave me medication for that. The doctor sent me home and told me that it should work within a week, and I should feel better.

After a week, I felt slightly better, but I was still sick every single day. I wasn’t vomiting, but I felt like I should be vomiting. So I went back to the doctor and said that it wasn’t working. So she gave me a stronger dose and sent me back home. I took that for two days, and it was not working and was making it worse. So I went back to the doctor’s, and they sent me to the hospital to get a CT scan with barium. They were going to check out my abdomen and my intestines.

When they showed that there was some compression on my duodenum, I looked up what SMA syndrome was. Every single symptom of SMA syndrome I had, except for vomiting. So I called my doctor and said that I wanted an upper G.I. done. My doctor refused and said that she took a closer look at my x-rays and that it looked more like I wasn’t getting enough blood to my intestines. I told her I wanted a referral to a gastroenterologist. She said that she wanted to get another CTA scan done, so I agreed, since it was just the IV contrast and not barium. When I got that done, it confirmed that I had SMA syndrome. That would explain why I was feeling so nauseous every single day for months.

I am now having a referral to a vascular surgeon. I am waiting for the surgeon to contact me so we can figure out how to fix and reverse my problem. I feel sorry for everyone who has my problem but has it worse than I do. I can’t stand stomach pains or anything like that, and I know that a lot of other people have it a lot worse than I do. I only dropped around 12 pounds from my SMA syndrome, and then decided I needed to eat a lot more food, even if it hurt me. I found certain foods that were easier to digest that were not liquids. I eat a lot of junk food, but I stay clear of a lot of bread.