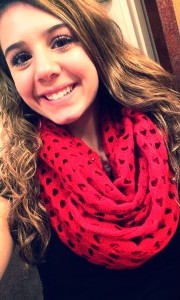 In January, 2 months had passed since I’d been to the doctor’s, and I finally went back. They said I lost 12 pounds in 2 months, so I got scared. My doctor contacted my local hospital and wanted an Upper GI and a sonogram, so I went the next day for testing, and later that day, after my tests were done, they sent me home. On my way home, my doctor called my mom and said I needed to come back to the hospital. So I went back, and the 3rd day I was in the hospital, they said I had Superior Mesenteric Artery Syndrome. I had no idea what that was, so my doctors told me and said that is why I’ve been having stomach problems for so long. They also said it’s really rare, and if I didn’t get it treated, I would’ve died.

The 4th day in the hospital, I had an NG tube placed in me to help me gain some weight back. I’ve been out of the hospital for 2 weeks now, and I’ve gained 8 pounds since then. I was so happy they found out what was wrong with me.