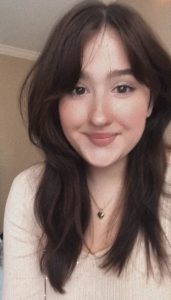 Before even entering the 9th grade, I had already seen at least 5 different specialists who all seemed to come to the same conclusion; I was fine. No one could figure out what was wrong with me, the plethora of odd symptoms, the disorientation and dizziness, and the constant chest and joint pain. We had no clue that all of my doctors visits over the years would be connected. I didn’t get my first diagnosis until I fainted on my first day of high school (way to make an entrance, am I right?). As odd as it sounds, I’m grateful for that day, because without it I would probably still be searching for these answers.

I unfortunately hit my head and was unconscious for a few minutes. I woke up to teachers hovering above me and a cleared out classroom. My dad was called and he took me to my primary care provider after I regained myself for an evaluation. That was when postural orthostatic syndrome (POTS) was first mentioned to me. My nurse practitioner told me all about POTS and how my symptoms lined up with the criteria. She performed an orthostatic test and confirmed her suspicions. I was referred to the same cardiology center that told me nothing was wrong with me just a few years earlier. This time I was seeing a different doctor, Dr. Michael McConnell, a POTS specialist. He ran a few tests (like an EKG and a cardiac ultrasound) and told me I had POTS. All of my past appointments with specialists were because of my symptoms and Dr. McConnell was the only one to connect the dots. I had the blood pressure of a 5 year old and he started me on a corticosteroid and a beta blocker. I was to visit him every 3 months, where he gradually worked me up to a few more medications and treatments. It was the first time I ever felt genuinely listened to by a doctor. He heard me, he understood, and he helped in any way he could. Dr. McConnell is now retired, but I am forever thankful for having him as my doctor for as long as I did.

High school became pretty rough after my POTS diagnosis. My health was declining fast and Mayo Clinic in Minnesota was our next stop. Students and staff did not seem to want to understand my invisible disability. I missed a total of 120 days of school during my sophomore year. I eventually needed to pull out all together due to my health, a lack of resources, and poor compromise with my high school’s board. My 504 plan was often ignored, even after meeting with the superintendent of my school’s county, and I was essentially pushed out of the system. Those 4 years are a hard part of my life for me to remember. I fell into a deep depression and felt like I couldn’t handle the life of being chronically ill. Being at home wasn’t much easier either, I spent two years of my life in bed. Even on a good day, standing up or yawning would cause my symptoms to flare. There were times when I would faint from just walking up my stairs. Crawling up them became a normal occurrence. All my showers were taken by sitting on the cold tiles because if I stood I would feel like I just ran a 10k. I’m lucky that I had my family to help me through this. My dad was my biggest supporter throughout this time. He drove me to my different appointments multiple times a week, brought me my medicine in bed, and made sure I knew he was there for me. It was never easy, we would argue about treatment and it was really tough on my family. They lost me in a way, or at least the able-bodied version of me. My twin sister went to high school without me and I couldn’t participate in most of the same family activities as I used to. My energy was limited to almost nothing and I felt like I was burning out. Taking care of myself became a daily struggle. Comparing myself to my siblings and friends who were living the “proper” teenage years came naturally. I eventually stopped eating and became underweight and frail. You can imagine how that helped my symptoms. My hair would fall out in clumps and my heart had to work way harder than it ever should’ve to keep me alive. I felt tortured and betrayed by my own body and I wanted that control back. I was trapped in a dark world of my own and I tried to escape it all together in August of 2019.

I spent two weeks in treatment and four months in an IOP program for my anorexia. I met so many amazing people and made lots of friends who were also struggling with their own situations. We were all in it together, and I didn’t feel so stuck. My POTS slowly stabilized more, I was weight restored, and I was thriving. Things started to really look up. I was seeing my friends again, I became an active member in a new church, and I started a job at a coffee shop that was like a second home to me.

My second diagnosis was a hard hitter emotionally. I would often have odd periods and unexplainable pain. I didn’t get my period for four months over  one summer and went into the OB/GYN for the first time at 19. My mom passed away from breast cancer when I was just 6 years old, so I never had much assistance with being a girl. I went to my appointment alone and was honestly terrified. Polycystic ovarian syndrome (PCOS) was immediately tagged as the culprit and was confirmed by finding cysts in my left ovary during an ultrasound. Being told that I had another chronic illness to add to my list felt terrible. I want to have a family one day, and now that isn’t a given. My mom and her medical history was then brought up and my doctor and I decided it would be best for me to be tested genetically for breast cancer genes. Two weeks later I got the call during work, and I never even considered that I would carry one. I have the ATM mutation which increases my breast and ovarian cancer risk by 20%-60%. Losing my mother at the age I did is something I wouldn’t wish on anyone, she was my best friend and I hate that I only got to know her for 6 years. I’m now faced with having to decide which treatment option I want to go through with.

I’m just two months shy of 20 years old and am about to be diagnosed with a form of Ehlers-Danlos syndrome. Every day is a fight against my own body. As much as I hope I will grow out of my POTS, my symptoms are worsening. I have to take 12 prescriptions a day just to stay afloat. My hips dislocate randomly, my heart rate rests at 150bpm and I can’t walk up stairs, and that’s perfectly fine. I’ve struggled with detaching and hiding my symptoms from others and it’s time to break that habit. It’s important to be open and honest with yourself about your health, it’s okay to have a body that works differently. Being as young as I am with almost three diagnoses and a future of cancer prevention is lonely and scary, but these things are out of our control. We have the power of community and websites like this to connect with each other and share our stories. My story isn’t over and neither is yours. We are able to control the way we view and approach the obstacles in our lives, our situations, and our struggles. Be the light you needed in your darkest hour.