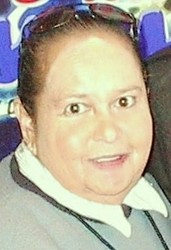 It was suspected about 24 years ago that I had Lupus when I went to the ER for a horrible sinus infection. I blew it off until 17 years ago when I got terrible pain and was finally diagnosed with 3 co-morbidities: Systemic Lupus, Sjogren’s, and Raynaud’s. It was scary when they told me I have a disease that has no cure and was considered a death sentence. As the problems progressed, I lost my ability to swallow solid food and can only have a liquid diet for fear of choking.

I decided this disease was not going to get to me because we had just adopted a baby and my plans were to dance at his wedding. I also had to help my husband who had a brain stem stroke at the age of 37. I had my goal set that I was going to beat the terrible trio. I have been fighting ever since.

About 4 years ago, I had a set back when we were in a car accident leaving me with herniated discs and stenosis of the C spine. It is causing some paralysis in my left arm, but I cannot let that slow me down. Our son is in his last year of High School and then off to college.

I have fought like a girl as up until the past year as the paralysis got worse I earned my Blue Belt 2nd degree in Kenpo Karate while my son became a Black Belt Sensei. I will not let this slow me down and will continue to fight like a girl and win this battle. I have a wedding to dance at when my son settles down and grandchildren to teach when he is married and decides he and his wife will have children.

I am not ready to give up my life and I will fight like a girl and encourage others to do the same!