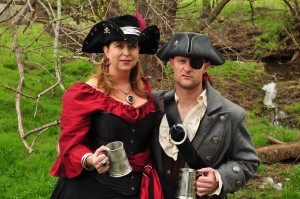 When I was 13 I was taken to the hospital for blue fingers and toes, and I had been sleeping more than normal. The hospital diagnosed it as Raynaud’s phenomenon and lupus.  For several years after that, along with various doctors, I was diagnosed and undiagnosed.

I had barely graduated high school due to so many absences. I plowed through several doctors, and was told never to have children because of the risk. I had petite mal seizures due to aspartame use. I had a daughter at the age of 23, but that would be the one and only. Her father wanted to put me in a cage and keep me safe, I wanted every good day used to the fullest. I had had mini flares and had found a doctor that acknowledged the fact that my immune system was indeed overactive, but was hesitant to label it. We avoided steroids for the fact that the side effects were worse than the symptoms.

In 2003, I had my first major flare up. I had been sick with one virus after another for three months. I would walk into work like an 80 year old woman with osteoporosis. My doctor put me on temporary disability which lasted a year. I went to see a RA doctor and an endocrinologist, both doctors were hesitant to do anything, I was 31 at the time, they both felt that I was too young to be having any serious problems. They did not consider my issues to be life threatening and I was pushed to the side. I did a lot of research and found ways to hold the symptoms at bay. My family physician and I were able to stunt the effects for several years by keeping constant watch on my thyroid and DHEA levels. I returned to full time work in 2008. I remarried in 2010, my new husband was deployed to Iraq in July of 2010.

On December 23, I woke up and had no voice, I had been battling colds and flues for a few months. My lymph nodes were inflamed all over my body, my glands were swollen, and my vocal cords were swollen. I was without a voice for over two months. I was practically bed bound, off work, and once again had displaysia, only this time I had no cervix or uterus. My doctor was just as confused as I was.  He sent me to a new RA, of course it took six weeks to get into see him, and by that time we had resorted to steroids because the pain was intolerable. The RA diagnosed me with hyper joint mobility syndrome on the first visit, which basically means I’m flexible. He made me feel like I was crazy. My family doctor was not happy with the outcome, after all he is the county health officer and one of the leading internal medical doctors in Northern California. He was just as disappointed with this new RA as I was, but he hoped that the RA would do blood tests that he may not have thought of.

During my next visit to the RA, my husband was home for two weeks during in deployment. The RA flat out told us that “I did NOT have an autoimmune disease!” But upon leaving he noticed that my husband had a pack of cigarettes in his pocket (his last by the way), the RA doctor told my husband not to smoke around me, because it will flare up my lupus, at which point my husband reminded this doctor that he said I didn’t have an autoimmune disease, the doctor left the room abruptly and was never heard from again, not even a last bill. He did indeed do some blood tests that we had not thought of, my own doctor and I were able to use those to relieve some of the pain and swelling. I returned to work in May of 2011. However, here I am again off work once again with a new fun flare up.  Although I have not been flare up free since then, they have been minor until a few months ago.

I started dealing with neuropathy all over, my face felt like I had been to the dentist, I haven’t had full feeling in my thumb since the beginning of July, my right arm tingles constantly, even a shower is uncomfortable. I am now trying acupuncture, it has some positive effect, but even the acupuncturist is confused by my reactions to this treatment.. I return to work Monday but only part time. Pain is an everyday thing. Some days are worse than others. The days that I consider to be good, I get out to do the things I love, like ride my Harley, go to the mountains, but most important is that I always tell myself I have plenty of good days to get past the bad ones. My husband and I take full advantage of those. I know my working days are numbered, but for now I will do what I can, and we have started a business as Pirate balloon artists and I sew. My hope is that sometime soon I will be able to quit my full time job and pursue my hobbies at lupus pace and enjoy everyday!