I’m not quite sure where to begin really. I’m a mom of two teenagers and an eight-year-old. When I had my children, that was the most thrilling time in my life. I thought for the longest time that I was pretty much used to frequent hospital stays, tests, doctors’ faces, etc., as I done it all pretty much monthly with my daughter when she was diagnosed with Haemangioma at the age of four months and an undiagnosed illness, which at age seven added involuntary tremors to the list. So for us, it was always doctors’ appointments, surgeries every six weeks, and visits with her neurologist.

Once she became a preteen, things slowed down, and I thought, oh good, life will be normal now. I guess my “troubles” really began around October 2011. For a long time, I always had these aggravating backaches that were so painful, but I didn’t really know why.

Well, in 2008, my husband and I brought a sick baby boy into the world, and my heart just melted with love. Not long after I had given birth, I was scheduled for a hysterectomy, due to a prolapsed uterus. A few months after I had my son, I had this severe back pain for about three days, where it hurt so badly to bend or even do anything. So my husband took me to the emergency room, and I explained to them that for the past three days, my back was so bad I couldn’t do my daily routine, and my OTC medication wasn’t working.

They did blood work, other tests, and x-rays of my back. We were told the following morning, as we were in the ER overnight, that I have arthritis on my spine. They gave me medication via injection to ease it and told me to follow up with my doctor. My family doctor had put me on Arthrotec, which at first, really did help. I made sure to follow my doctor’s instructions and take my medication as prescribed.

Fast forward to October 2015. My husband and I had to suddenly pack and move, so at the time, we lived in a motel, and I woke up one morning with bad pain in the back of my leg, like a muscle cramp. But I didn’t remember hurting it, so I just brushed it off and went about my day. The following morning, I was in extreme pain. I could no longer stand up. I couldn’t walk, I couldn’t do anything, so my husband called in sick to stay with me.

As the day wore on, the pain was worse, so he called for an ambulance. The paramedics took me to hospital, and they did test after test and blood work. They came back hours later and told us they thought it was just a flare-up of Sciatica. Um, ok. What the heck. They had given me pain medication–oxycontin–which did not alleviate the pain whatsoever, so they came back with an injection of Dilaudid. I wasn’t even sure what that was, but would help me sleep, and they gave me Gravol for the vomiting.

I went home, and 3 days later, I was feeling a little better, so I went about my business as usual. Things were somewhat ok after that. I had bad days, and I had ok days, so I looked ahead to the good days. Little did I know, that was nothing compared to what I was in for.

February 2016, we got a new apartment and moved in, and we were hoping things would start to settle down. We celebrated my son’s 18th birthday on April 2nd, which was a pretty ok day. On April 5th, I woke up like I do any other morning, but as soon as I went to get out of bed, oh my god, I was in the most excruciating pain I had ever felt in my life. I should’ve noticed in my sleep when turning over right? Not me. I have OSA, so I have to sleep with a CPAP when I go to bed. Anyway, I couldn’t even stand for 10 seconds, let alone without pain, because I would fall right over. The pain was so excruciating, I couldn’t even walk to use the washroom.

I laid on my bed and found the ONLY comfort I could feel was if I laid on my left side. If I laid on my right side or my back, I was wailing in the most severe pain. Again, off to the emergency room we went. The whole time we were there, we got the runaround from the doctor “looking” after me. I had never ever seen a medical professional so ignorant. He gave me oxycontin and 2 Advils, even though I told him it would not help and the pain would not ease. He made me take it anyway and sent me home.

A female doctor came in before we were discharged and said the x-rays showed a “hairline fracture,” or something like that, and she booked us for an appointment the following day with the orthopaedic surgeon at another hospital. I struggled to fight through the pain, and we took a cab to the hospital for my appointment. I saw the surgeon, and she wasn’t sure what was wrong with me, so she sent me to get a CT Scan done, which wasn’t easy. As we were leaving, the technician told us to go back to the surgeon, although she said we could leave. The technician put me in a wheelchair–oh my god, I told them I couldn’t sit!–and wheeled me down the hall in the wheelchair, screaming back to the surgeon. Why? About 10 minutes later she came in and told us they “thought” they knew what was wrong. They said they thought I broke my hip, and I’d need to be admitted for more tests and possibly surgery. Yay! An answer finally to all my distress and misery?

To end this long story, April 7, 2016, I was admitted to a hospital where I would remain for 2 weeks, taking many pain medications through my IV. Sadly on, April 9, 2016, the answer to my excruciating pain and misery was discovered, and I was told, with my husband beside me, that aside from the arthritis on my spine, I have scoliosis on my right side and DDD (Degenerative Disc Disease). I am right now if I can walk a block, but I am doing physiotherapy, hoping it will help some. My doctor has me on Dilaudid and Hydromoriphone. I am at the stage right now of having to go on disability because I just can’t do what I love as a PSW anymore. We have colon cancer, stomach cancer, and prostate cancer in our family history, so it worries me at times when something is wrong and I don’t know what it is.

I am ashamed to say I am obese, as I began gaining weight after being on and off the DepoProvera birth control injection for years. I try to diet and exercise, but I don’t get the results I want, so I was looking into getting a Roux-en-Y Bypass (weight loss surgery). But now with my arthritis, scoliosis and DDD, it truly scares me what could happen to me and what complications would arise, since I am not very mobile. I won’t let that stop me though, as I’m in talks with the doctor to see what options I have. I don’t know what my future holds for me, as my doctors have told me that my condition will deteriorate.

Thank you for listening. 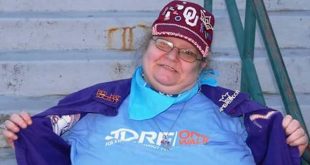