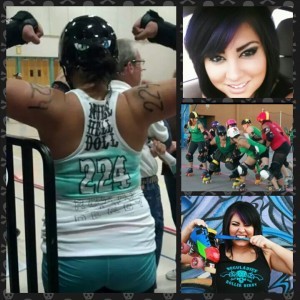 Hello, my name is Andi. I was very recently diagnosed with Chiari Malformation. I’m a rough and tumble girl, along with my 3 sisters. I’ve always been the “sick” twin between my twin sister and I. When we were born, I decided to breech last second and forced a C-section. The nurses noticed I had an abnormal heart beat, but nothing came of it.

In T-ball, I fainted and was assumed to be dehydrated, no biggie. In high school, I started suffering from debilitating migraines, and about 6 months later came the heart pains. Not chest pain, actual heart pains. Doctors assumed I was just stressed with school on top of sports, orchestra, symphony orchestra, JROTC and mariachi. They told my type A personality to ease the throttle on my activities and the migraines and heart pains would subside.

Then one day in sports medicine class, my heart felt like it had been stabbed, and down I went. I woke up to the sports med teacher and school nurse attempting to get a heart rate and blood pressure on me to no avail and the basketball coach on the phone with 911. Visit after visit with cardiologists led nowhere. I was sent out of town to seek treatment and found I was getting ventricular tachycardia arrhythmias. I had a cardiac ablation in 2008. The chest pains were gone along with the migraines. I was finally a normal kid getting ready to start college.

2 years after getting my nursing license, I was still having heart rhythm issues, and the migraines were back. I started making mistakes at work and lost my job because my charting started to become incomplete. Medical terms I was using didn’t make sense in the context. I was hired strictly because my charting was the best my boss had seen. I couldn’t concentrate to save my life.

We had a roller derby game to help raise funds for my fellow teammate’s son for his cancer treatments, and I volunteered to referee. My skate broke, so I borrowed a pair. They were not the right size and were not adjusted to my sense of balance. After half time, I was falling over and skating like a baby giraffe. I was struggling to keep up, making horrible calls, and on my way home I noticed my right eye was blurry and I couldn’t see well. The next morning, I woke up with the worst hangover of my life. I mean, like I drank a whole bottle of tequila by myself (assuming). So knowing I have heart issues, one thing came to mind. STROKE.

I called my cardiologist and primary care doctor, and they both told me to ignore it and that I must have been hit in the eye during the bout without me noticing. Well, 3 weeks later my vision had declined. So I switched primary doctors and got referred to an ophthalmologist, and they found nothing wrong. My new doctor then set up a CT scan to check my brain.

And here we are! Got a final diagnosis, and I couldn’t be happier. It was so minimal that it went unnoticed, but the theory is that every time there was a flare or change in distance herniated, that’s when my heart beats were changing. I have a not-so-typical case of symptoms, but I couldn’t be more thankful to know what’s been causing my ailments. Now we’re going to look into treatment options. I’ve been a fighter my whole life. I play roller derby, I’m tough, and I will beat this down!!!