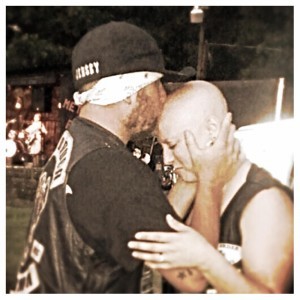 I’ve never really shared it, so here it is. This is MY story.

I can fight cancer. I never really gave those words a serious thought, until the day I heard them being spoken to me.
I remember when I was told the words, “You have cancer.” This was my personal 9/11 all over again. This time, instead of a flight line, during an exercise, I was standing in the pharmacy line, when my doctor called. When I answered his call, he said to me, “Holly, your results came in. You have breast cancer.” Not completely how its done in the movies. In a crowded place, I felt as my world had just collapsed and I felt claustrophobic.

Let me begin at the beginning. It all started in February 2013, the week before Valentines Day. I noticed a sharp pain and small lump on the left side of my right breast. At first, I honestly didn’t pay any mind to it, shaking it off as a calcification, that I occasionally got, mixed with anxiety pains due to the stress I was under for being in school for my job and almost completed. During the next few weeks I had noticed that this lump and pain was actually moving. It moved from the left side, up, and over to the right side of my right breast.

By the time I was able to see my doctor it was March 4th. I was scheduled for a routine checkup and to go over my BRCA test results from October. The results had come back all normal. At the end of the visit, he asked if I had any questions. Normally I don’t but something made me mention this. So, I explained the lump, pain, duration, and he did an exam, all while saying, “Holly, cancer doesn’t move.” He felt the lump, and thought of it as benign. He also thought I was too young for breast cancer. He scheduled an ultrasound for me.

So, I waited for the nurses to call me the next day to set up my appointment. Nothing. So, I waited until the end of the week. I had to call the office, and asked what was going on. I ended up with the ultrasound appointment on Wednesday, March 20. The verdict, “It may be cancer.” The doctor wanted a mammogram done. We were all like, “let’s do it now,” but the tech wasn’t there. So, the next day, Thursday, March 21, I had my boobs all squished up. Same verdict, “May be cancer.” The next step was a biopsy. Once again we were all like let’s do it. Friday, March 22, I had the biopsy done. I remember there was no mention of the “C” word. I was trying to be optimistic, but I knew. I was just trying to optimistic since I had a two year old’s birthday to plan for.

So, when the call came through four days before my daughter’s birthday, and when I came home in one piece, surprisingly, the first thought I had was my baby. I thought I had ruined her life. Instead of living the fun filled life a 21 year old should, she will have to get a mammogram done. When I told a friend this, she stopped me in my tracks by saying that my baby will be celebrating that wonderful milestone. She WILL celebrate with her mommy! She will celebrate her life, and mine, us, together.

David was overseas in Afghanistan when I was diagnosed. Spouses always dread that phone call, the one about their loved ones who are overseas. Well, this call was in reverse. I had kept my husband up to date on all the appointments, and told him I’d call when my results came back. That was the hardest phone call I had to make. I knew he was sleeping, but I called him. He was able to come home long enough for my two surgeries, which I had refused to have until he was by my side.

Since day one, I worked full time, took care of our baby, did my normal things, all while having and recovering from cancer. I had my ups and downs, found out who was truly there for me. Lost friends, family, and gained new ones. I had hit denial, then acceptance. As soon as I accepted this, I became positive. I had let go of all the negativity, to include family and friends, and saw a bright outcome. The more positive and optimistic I am, the better I feel.

Remember when I said that my doctor said cancer doesn’t move? Well, apparently the kind I had does in fact move! The pain I was feeling, was where the cancer was attacking. If I hadn’t gone in when I did, within six months, I wouldn’t be here today. Also, remember when I said that my BRCA came back normal? Well we had come to find out that the BRCA doesn’t test for the cancer gene I had!!!
I am not a saint, nor am I a famous person. I am just a young mother who is trying to help spread the word of how dangerous cancer is.