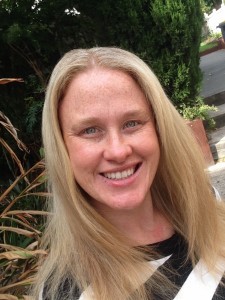 I’m a 33 year old mother of 2 beautiful girls. In 2012, after losing a baby towards the end of a pregnancy and then 3 months later, finding out that my husband had 2 bleeds on his brain and required brain surgery and a year off work to recover, I thought all my “life isn’t fair” cards had been dealt. Turns out I was wrong.

In May 2014, just when we thought everything had started to get back on track, my husband pointed at my neck and said, “You have a lump on your throat.” I noticed a small lump sitting just where my voice box would be. I laughed and said that I might just have a bit of an Adam’s apple. He casually said that I should have it checked out the next time I was at the doctor’s. I “hmmmmed” and didn’t think much more of it.

The next time we were in the doctor’s office, I mentioned it. He said that it was probably a nodule and that these are normal and common, but it should be checked. Off I went for an ultrasound which came back with “multi nodular thyroid with no suspected malignancy.” Perfect. My doctor and I were both pleased, and he mentioned that it would need monitoring, and he would refer me to an ear, nose and throat specialist. I’ve always been one to wait for the best specialist, so I had a 6 week wait. On my first consultation with the ENT, he too was not concerned, but sent me for a FNA (biopsy) and CT Scan.

Whilst having my lump biopsied, the doctor looked and me and said, “There is one more area that I would like to biopsy.”
“Another nodule you mean?” I said. He looked at me, and I noted the kindness in his eyes. “No, a lymph node.”

I laid as still as I could as tears rolled down my face. “One more sting…… One more sting.” I will never forget him telling me that over and over as he stuck the 12 needles into my neck over and over again. Sure enough, the following week I was diagnosed with Thyroid Cancer that had spread to the lymph nodes on the right side of my neck.

On June 5th, 2014, I had a total thyroidectomy and neck dissection. The surgery wasn’t as bad as I thought, and I had fantastic support. I was home after 3 days and back to work 2 weeks later. If I could have afforded to take the month off between surgery and my radioactive iodine treatment, I would have. My pathology results came back with Papillary Thyroid Cancer with 1 out of 30 lymph nodes affected.

After withdrawing from thyroxine and turning into a puffy, lunatic, crazy person, I had the scan that confirmed that there were only a few cells remaining at the surgery site and nowhere else. Perfect. The oncologist thought it would be best that I had a low dose of radioactive iodine ablation (RAI) just to kill any of those cells.

The RAI was great. No side effects. I was well cared for at Peter Mac Cancer Centre in Melbourne and on my way to getting back on track. The following week, I had a follow-up scan that should have shown that the uptake of iodine was just in my throat area. However it showed that the cancer had spread to my left lung. However it was microscopic and could not be seen on a CT Scan at 1mm sections.

So now I get to fight like a girl. My version of fight is pray, hope, become a wellness warrior, and live a better, simpler, happier life, and hope that this horrible, horrible disease is gone come Feb. 2015 when I’m due to go back for another check up.

Update 3/16/16: After her last scan on March 16, 2016, Heather has officially been declared cancer-free! There are no remnant cancer cells in her neck or lungs where it had previously metastasized. No more scans, no more radioactive iodine, and no more cancer. She fought like a girl and won!