Home / Articles / Health and Wellness / The Benefits of Garlic

The Benefits of Garlic 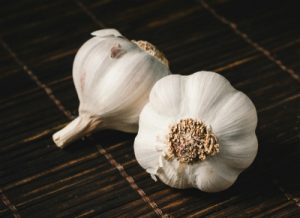 Used to ward off vampires and werewolves by Central Europeans long ago, it’s been called ‘the stinking rose’ and has its very own festival on the last weekend of July every year in Gilroy, California.

It’s biggest consumer? South Korea. Considered an herb by some and a vegetable by others, it is very well known for its culinary and medicinal properties; used by cooks to enhance the flavors of their favorite dishes and used also in naturopathy for its healing properties from allicin, a powerful antibiotic it abounds with. It has also been shown to lower cholesterol and due to high diallyl sulphides, an anticarcinogen, some suspect it could even possibly fight cancer.

What is this wonder herb/vegetable? None other than garlic, relative of the onion and the leek, reputed for its strong, hot flavor and distinctive aroma.

Garlic, of which there are nearly 400 different varieties, has been consumed and used in healing from the earliest of times, in almost every part of the world. In some parts of the globe where the culture is a little more tolerant of the pungent aroma that the consumption of garlic leaves behind, it is eaten chopped and raw, with the utmost of benefits to the diner.

Cooking garlic, as it is done in European and Western nations, is done to temper its pungency but destroys the allicin, thereby lessening (but not destroying) its health benefits. Cooked garlic is still rich in vitamin B, minerals, flavonoids, enzymes- and flavor.

The most commonly used type of garlic, (allium sativum or ‘softneck’), does not grow wild and is believed to be the result of cultivation from the ‘hardneck’ varieties that do.

Common varieties of garlic come from the family named artichoke, which consists of the California Early, Early Italian, Italian Late and Japanese just to name a few. There is also silverskin and elephant garlic. Generally, people choose the common California Early type (from the artichoke family) found in grocery stores for their recipes.

A head of garlic consists of tightly packed bulbs wrapped in a thin papery skin. Most cooks employ the method of ‘crushing’ individual cloves to remove the skin before cooking, roasting or chopping garlic into flavorful condiments such as garlic butter and salsas or using it to enhance the flavor of meats, broths, salads or sauces- just about anything that a cook wants to give a robust flavor to.

Looking at a bulb of garlic that fits in the palm of your hand, it would be hard to guess that such a small package could be loaded with so many powerful anti’s: an antibiotic, antifungal and anticarcinogens. Of course, one whiff of its pungent sulfides may erase that doubt altogether. These sulfides, undigestible in the stomach, metabolize in the bloodstream creating allyl methyl sulfide, which is then excreted by the lungs and skin, resulting in that garlicky odor (ahem, ‘garlic breath’) that can persist long after grandma’s good old fashioned pasta with garlicked marinara sauce (don’t forget the garlic bread) have left the table. While fresh parsley is slated as the way to alleviate this problem and freshen breath, it is only a quick fix as no amount of parsley changes the fact that digestion takes several hours, meaning the sulfides will remain in the bloodstream and be excreted regardless.

If the scientific research into the health benefits of garlic is accurate, studies show that garlic can in fact lower cholesterol, inhibit atherosclerosis and prevent certain complications from diabetes; and although no clinical trials have been established to substantiate their claims, garlic enthusiasts swear by its properties and abilities to take care of everything from infection to hypertension. Luckily, for those not wanting to contend with the embarrassing aroma that eating raw garlic can produce, garlic supplements, readily available in drug stores and supermarkets, offer all the advantages of eating raw cloves without the ‘offending aroma’.

So, whether it’s Aunt Sophia’s perfect lasagna or perhaps the garlic ice cream you’re enjoying at the Gilroy Garlic Festival (self proclaimed garlic capital of the world!) in California this year, it’s good to know you’re not only partaking of a delectable treat but a most flavorful way to ensure your health! What could be better?

Don’t forget to, ahem, bring a roll of mints!

Previous Medicine and Prayer
Next The Abundant Benefits of Honey