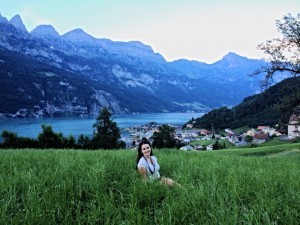 After almost seven years of trying to hide my illness, it is time to metaphorically come out of the closet.

One day when I was in fourth grade I all of a sudden hunched over in my seat from a sudden and intense onslaught of pain. As you guessed it, I awoke in the night to blood soaked sheets. Suddenly I was transformed to a woman at the age of nine. My periods were never irregular or light, but often debilitating. Of course my mom and I went to the pediatrician who simply thought that my body needed to adjust.

One year later and I was being rushed to the emergency room on almost a weekly basis, I was misdiagnosed anywhere from  gas pains to mesenteric adenitis to IBS. It was also around this time that I was referred to an OB\GYN. On the first visit she mentioned endometriosis and immediately put me on a birth control regimen. I was also referred to a GI who simply said that I had severe pain because I was depressed. Well gee, I guess being in extreme pain everyday and having no reason why would do that to a person.

Two years later, at the age of 12, I was barely living. Every time I ate I would just throw it up. My whole right side felt like it was on fire. Finally, I entered the OR for a laparoscopy to officially diagnose endo.

Not only did she find endo on my cul-de-sac, bladder, and ovaries, dense adhesion’s were found likely due to inflammation. My stomach was actually adhered to my abdominal wall. I thought this surgery would be a cure-all but nine months after the surgery the symptoms were back with a vengeance.

I then took a semester off of school and trekked over to San Jose to have surgery with a top specialist. What originally was supposed to be a less than an hour surgery ended up taking almost four. He said he couldn’t imagine a 13 year old having to live with that daily pain.

That surgery was very beneficial and saved my life but unfortunately all good things most come to an end. The daily pain is starting to come back and I am scheduled for another lap in three months. In the mean time I am on Danazol to make the pain manageable for the time being.

For almost seven years I always thought that “women’s problems” are something you just don’t talk about. Now I’m stepping into the light and helping other teenagers fight battles like mine.