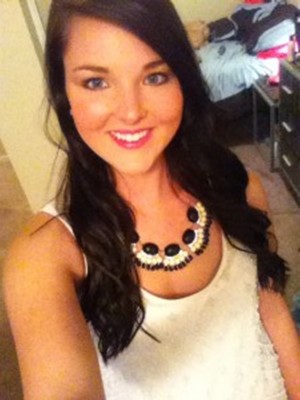 When I was thirteen I got my period. I was excited because all my friends had gotten theirs already. It was light and lasted three days. I was happy to tell my friends about it. But then I didn’t have it again for six months. When I finally got it I bled for three months. I was told it can take a year to straighten out. My cramping kept getting worse.

At 14 I was diagnosed with a large ovarian cyst and was put on the birth control pill, but I still had pain. I had to convince a specialist to do surgery on me after one doctor was convinced I had endometriosis as well as PCOS, but refused to operate since I was so young. After my surgery, I was told I had a chocolate cyst removed and “stringy, white” endo off my uterus. He left a chunk of white endo on my ligament close to my bladder (he was afraid to attempt to remove it).

Flash forward two years. I was in pain again. Even though I was not allowed to have a period (continuous birth control) due to the pain, the endo had returned. I had surgery with a specialist at 18. Adeno was mentioned. The piece in my ligament had grown and it was removed. Flash forward one year now. ER visits and pain became normal, I had pain with sex, and pain with breakthrough bleeding because my birth control pills weren’t strong enough.

At 20, I had another surgery, after an unsuccessful round of depot Lupron, which made me so sick I lost 15 pounds off my 120 pound frame. Despite the Lupron, I had small spots of cul de sac endo spread out. It was excised. Flash forward eight months, I had four different birth control pills, with rounds of progesterone therapies and painkillers. I am sitting in my bathtub crying because nothing will take away my pain for more than a few months if I’m lucky.

Doctors don’t know if I can have children. I am depressed, angry, in pain, and even my specialist seems to have become frustrated. He took me off my painkillers and told me to see if this new pill worked. My professors don’t understand why I have so many absences. The thought of sitting on a hard stool for three hours enduring cramps and twisting nausea kill my drive to become a vet or anything else productive for that matter. I try to hold it in because I know that unless you have experienced it, you wouldn’t understand. I am not that friend who got pregnant and was okay, or that took birth control and was okay. I’m the one that sits alone with her heating pad and wishes she could talk to someone who wasn’t sick of hearing about it. Maybe one day there will be a cure for girls who have tried everything that never works. After all the painful testing, hormone therapies, and nights crying, I know I have the strength that many lack, which is the only good thing to have come from this disease.