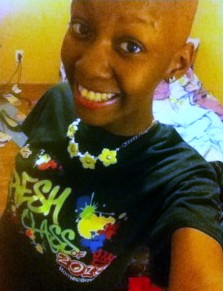 Two years ago, my sophomore year, I got diagnosed with cervical cancer. I thought my life was over. It felt like my heart dropped as the doctor told me, “There’s a tumor.” So many things ran through my head. Was I going to die? Was I going to lose my hair? How did I get this? So many questions with very few clear answers. I was told that I was going to have to go through surgery and would be out of school for 2 months.

Many people reached out to me for comfort. I got closer to God like never before. While in the hospital, it felt like miracles were happening and God was the only explanation that came to mind. Most of the time while in recovery at Barnes Jewish Hospital, I felt very lonely and depressed. Even though the situation was scary, I always tried to never complain. Being around many other people with cancer made me realize I could have had it worse. I kept my head up and I always had hope. Hope and faith are extremely important to me because I think they’re the only things stronger than fear.
I was recovering from my surgery well, and it was finally time to head back to school. I missed all my friends. Being gone so long made me realize who my real friends were and who was really there for me. All teachers welcomed me back with open arms. They had tons of work for me to catch up on, and luckily, some was excused. I was determined to pass all my classes though, even if I couldn’t still get the A’s I had before and wanted so badly. I was issued a tutor whose teachings didn’t really help me much, but I appreciated him. I eventually caught back up with a B+ average and was ready to put the past behind.

I was so excited to be on track at school and to rejoin drama club. Everyone in theater is like a family to me. I was so eager to audition for the upcoming school play. When finding out who made the school play, I did not make the cast list. I was pretty disappointed. I felt nothing would ever be right in my life. Acting was my life and I needed to explore it.

I was was so excited about going back to drama club that I forgot that, in only a few weeks, I would have to go back to Barnes Jewish Hospital for a follow up appointment. My appointment was nerve-racking. I was fidgeting, and my heart was beating fast. My doctor told me the tumor had gotten smaller but additional treatment was necessary. I feared the worst, but a relief came over my body when my doctor told me I was going to get radiation therapy. This treatment was less harmful than chemotherapy, and I would still be able to continue with school. I was told I was not going to be able to part take in any school activities though because radiation makes you extremely weak. I thought about the play I didn’t make and realized I wouldn’t be able to be committed to it even if I did make the cast. God works in mysterious ways for me.

I went through 2 months of radiation therapy. I didn’t feel many side affects and thought I was fine to join crew for the play on the days I had radiation in the morning instead of after school.  It was almost the end of the school year when I finished radiation, and I felt like the school year was a total drag. I wasn’t able to stay connected at school or join activities. My mind just wasn’t on task like it use to be. I continued to read my Bible and have faith in God over the summer. I prayed regularly. My appointments at the hospital were going fine and summer break was going good as planned.

When summer break was over and it was time to start a new school year, I knew this would be a great junior year. My social life was going so well, and my grades were exactly how I wanted them. I was ready to start drama club once again. We were doing a district play with two other schools. I was cast in it along with the best actors to represent my school Hazelwood East High. It was an amazing experience. Truly a most memorable high school memory. God was guiding me along, putting the right people and things in my path. Next was our first play for the fall, entitled “Our Town.” I landed the lead role and was overjoyed. God was answering my prayers, and I knew my future would be set.

Getting diagnosed with cervical had a major influence on my life. I now want to go to college and major in drama. I want to be an actress and perform. Some may think getting cancer is the most horrible thing that can happen to you, but for me, it was all about the journey. It made me realize that going to college and starting a career is the best plan for me. I wouldn’t change a thing. It has made me stronger. I fought like a girl.

Fast forward to my senior year and things had taken a turn for the worst. The cancer was back! And it put a hold on my plans for the next chapter in my life. It spread throughout my body in my lungs, liver, and ovaries. My kidney was also obstructed. I felt like this was round two of cancer, and I wondered when will it all be over. When will I catch a break and gain some peace? Chemotherapy was the only option. I lost 30 lbs in a matter of months. I lost my hair, and I lost someone that I thought would always be there for me while also getting my heart broken for the very first time. Many times I wanted to give up. The side affects of chemo sucked, and I felt alone. I started to lose hope and faith and forget the things that really mattered, which was fighting to get better. But luckily I had support from many friends and family members. I had Prayers and people to make me smile when I felt alone. My battle with cancer isn’t over yet, but I refuse to stop fighting. I will be healthy again. I will wake up one day and be proud of myself. I will go after my dreams, and when I’ve accomplished my wildest dream of being a movie star and winning an Oscar, I will praise The Lord and tell the world: I fought like a girl.