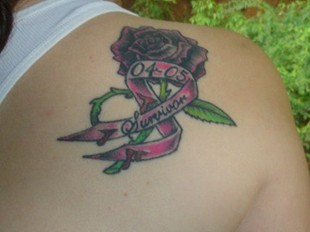 My name is Deseree Cundiff. I am a single 34 year old mom. I have a wonderful son that is 14 years old. This is the story about my life with breast cancer.

It all began one day in November of 2004, a week before Thanksgiving. I was a student at Augusta Technical College trying to earn my Associates Degree in Accounting. On that fateful day I dreamed that I had breast cancer. You might think that a 26 year old would not have those kinds of dreams, but I did that day. I was worried about it, but tried to not let it bother me. A few days later I was at my computer desk reaching for something when I grazed my right breast with my arm. It sent excruciating pain through my chest and expanded out. I remembered my dream and it worried me. I decided to do a self-examination, thanking the doctors’ offices that had pamphlets on how to do proper self-examinations. I found a lump. It was about the size of a nickel. I was scared and knew what it was as soon as I found it. I got an appointment with my physician within a week. He felt the lump but was sure it was nothing to worry about. But I told him I really wanted it to get checked out. So he ordered an ultrasound on my right breast. There was something there, but the doctors were still saying it was probably nothing to worry about. They said it was probably just a benign lump. I had a lot of doctors tell me they were sure I didn’t have cancer. One doctor even told me she was 99.5% sure that I did not have it. I started to get my hopes up, thinking maybe it was nothing after all.

On December 28, 2004, I had a lumpectomy performed, and that was to be followed with tests in the lab to determine if the lump was cancerous. On January 4, 2005, I had an appointment to talk to Dr. Duggan about the results of my test. My dad, step-mom, sister, and my stepbrother’s girlfriend were there with me. I received the news that I had cancer. Thankfully my sister was there in the room and was a great support. I was not strong when I found out. I cried and cried like the world was coming to an end. I felt like my life was going to end. I was worried that it had spread and also about my losing a breast. Dr. Duggan at University Hospital was a great support. He didn’t tell me everything would be all right; he just let me cry and gave me a hug. He was so supportive of me, along with my family and friends. He didn’t try to candy-coat anything, and for that I am thankful. He told me he was not sure how they were going to go about treatment of the cancer. He said that he would have to talk to the board about it, because I was in Stage 3. I found out a week or two later that I would need a mastectomy and 6 rounds of chemotherapy.

I had my mastectomy a few weeks later, in late January of 2005. I thought I was strong enough to handle it. I was wrong. I let it get to me. I gave up on my life, my friends, and family. I quit going to school. I quit talking to my friends and mentors. I let the cancer take over my mind. I felt like the cancer hurt my mind more than it hurt my body.

A few weeks before chemo I decided to shave my head so I would not have to deal with all the hair coming out. I went about this the wrong way. I decided to use a disposable razor. Not fun, let me tell you. I ended up with razor burn and had to walk around for two weeks with cornstarch on my head and with my son’s daddy playfully swatting my head to remind me of that little mistake. I started chemo in March of 2005 and ended it in June of 2005. It has now been almost eight years since my last treatment. June 10, 2013 will be my eight year anniversary.

For about 3 months after my last chemo treatment I didn’t do anything. I was still suffering from my depression and social anxiety due to how I felt the world looked at me. I tried my best not to go anywhere. But thankfully with the butt kicking and support of my family, I decided to go back to school. I graduated in June of 2006 with my Associates of Applied Technology in Accounting with a 3.44 average.

I started to have my reconstruction done in October of 2006, but wasn’t able to get it complete because of losing my insurance. But you know what, I am okay with that. Not 100% okay with it, but mostly okay with it.

Some people might say they would never go through an experience like this again. But I am not one of those people. I hated that I lost my breast. I hate what I had become during that time in my life, but it has taught me a lot about myself and what really makes me a woman. It’s not the breast. It’s not the hair. What makes me a woman is what is in my heart and mind. I still suffer from low self esteem now and then. I think that any normal human being would. This experience has shown me what life is. It has brought me closer to my family. It has made me stronger mentally. I would never want to change my past with this breast cancer. I am thankful for the experience.

I would like to leave you a few tidbits of advice.
1) You are never too young for self-exams or breast cancer. Be aware of changes in your body. If you are worried about something, go get it checked out. If the doctor says it’s probably nothing, demand a test. It’s always better to be safe than sorry.
2) There are those that can help you through your fears and joys throughout everything. Usually it will end up being those that you never thought would be there for you. They will come seeping through the wood-works and become your support. I know because this is what happened with me and my family.
3) Last, but definitely not least, do not shave your head with disposable razors. That will only cause you more pain and discomfort. As you can tell from my story, I know from personal experience. That was something I could definitely have done without.

I hope this has helped someone else, or has opened someone’s eyes to realize that it can happen to anyone. In 2010 I decided to get a tattoo to celebrate being a survivor. It was designed by my friend and I. Thanks for your time in reading this.