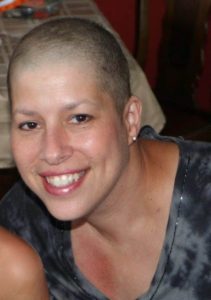 This August will mark eight years since I completed treatments (chemotherapy & radiation) for breast cancer. I am a Survivor! My cancer was caught early due to the forward thinking of my family doctor, who had been ordering mammograms for me due to my family history, even though I was in my 40’s. My grandmother and my aunt both passed away from cancer. Both had breast cancer, which had later returned (in my aunt it hit her pancreas as well) and eventually took their lives. This family history was on my father’s side, so I was not considered high risk.

The cancer was not palpable, so if not for mammography it would have been caught much later and my story may not have been able to be told at all. So here it goes…You are placed on a conveyor belt of treatment. Surgeons, tests, oncology visits, and more tests. I had a partial mastectomy; but had wanted a full double mastectomy. The surgeon did not feel the surgery needed to be so invasive and that a partial would remove the cancer. Oncology suggested radiation and tamoxifen only, no chemotherapy.

I couldn’t help but think about my grandmother and aunt, so I continued to raise the concern about the treatment protocol and pushed for more. I was a candidate for the Oncotype DX testing, done in California, so the oncologist agreed to that testing. Much to her surprise, the test results came back and showed a very high percentage of recurrence of my cancer. The oncologist followed the treatment recommendations from the Oncotype DX test results. In 2012, I had eight rounds of chemotherapy, two blood transfusions (because my levels bottomed out), and 27 out of 29 radiation treatments (stopped early because the burns were so bad).

I went for genetic testing when my treatments were completed. In January of 2013, I found out I was BRCA2 positive. I had a complete hysterectomy in June the same year, followed by a bi-lateral mastectomy with bi-lateral pedicled TRAM flap reconstruction in August. The surgery left me with some areas of necrosis in the breast mounds, and an abdominal hernia. Both were re-done in 2019; but the stitching came loose on the abdomen and needs to be re-done again this year, along with some touch ups on the breast mounds.

There was only one other member of my family, my first cousin Jane, who tested positive for BRCA2, (my two children are both negative 🙏🏻). Jane had a bilateral mastectomy in 2018 and showed no signs of breast cancer. Being proactive, she was set to get her ovaries removed as well. Jane died in September 2019 of pancreatic cancer. You see BRCA2 has three top cancers: breast, ovarian and pancreatic. We did not see this coming in Jane. She was weeks shy of her 54th birthday and was very healthy. As a result, I am now being followed for pancreatic cancer and tested every year with in depth MRI scans. I will cross that bridge when and if I ever have to.

I am a warrior with a body full of scars. Although my appearance has changed and wears the marks of the battles, I am beautiful. I am blessed to be able to continue to fight. I advocate for not only myself, but for others. I help support anyone I can that has to walk the path of cancer. I am always willing to share my story and remind everyone that we need to take one day at a time…to plan small celebrations along the way, because no day is guaranteed. To see the beauty in the small things, like the colour of the sky or the way the wind blows through the trees. To tell those you love, how you feel. To all those who have fought, to all those have lost and to all those fighting right now, YOU are not alone. I send you strength, courage, and love. You CAN do this!