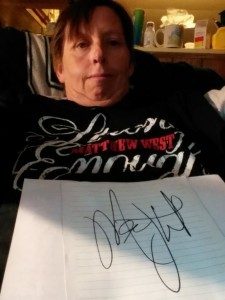 Back in November of 2011, I went to the doctor because I was extremely bloated and very tired. My primary care doctor gave me a laxative (even though I told her that my bowels were moving fine) and said if that didn’t help to go to Urgent Care the next day.

So the next day, I went to Urgent Care, and they pretty much dismissed me and were going to send me home when I asked if they could at least do an ultrasound or an x-ray or something just to make me feel better. They finally agreed to do an ultrasound. After the test was done, I went home and waited for the results. The next day, I got a call saying I had fluid in my abdomen and needed to have it drained. That appointment was two days later. When I had the procedure done, they drained five liters of fluid from my abdomen. They also sent in a sample of the fluid to be tested. Three days later, I had an appointment to discuss the results. The fluid was cancerous.

Next, I was sent to see a gynecological oncologist. She said that they wanted to do exploratory surgery, and if necessary, a hysterectomy. My surgery was scheduled for December 27th. In the meantime, I was also diagnosed with skin cancer above my lip on the right side of my face. This also needed to be removed, but could wait until after the other surgery was over.

I went in for my surgery on December 27th. When it was all said and done, I had a complete hysterectomy, and my omentum was removed due to numerous tumors. I spent six days in the hospital due to a pulmonary aneurysm. When I was released, they had me on blood thinners. After I got some of my strength back, we did my skin cancer surgery. I was awake for the surgery, and it sucked.

Next, we set up chemotherapy treatments. I had three different types of chemo, and the sessions took about six hours. I had one session, and when I went to do my blood work for the second session, I blacked out afterward when heading to my car. I woke up the next morning in the hospital with a fractured skull. I spent six days in the hospital again, and this time, I came home with a cava filter which eliminated the need for blood thinners. My head healed pretty well, except that I would get dizzy if I laid flat or stood still for any length of time. So I ended up in a wheelchair whenever I left the house. A couple of times I thought that I was over the dizzy spells, and both times I was wrong. I ended up in Urgent Care both times, and I decided not to try going out without the wheelchair for a while.

In June of 2012, I finished my chemotherapy treatments, and then they ordered a PET scan. It showed that the cancer was gone, and my CA 125 was down from 178 to 30. Now they decided to put me on Avastin, which they considered to be preventative maintenance. They said I would stay on it for a year, and then we would see what happened. Mind you, I was given a prognosis of 18 months to live and told that I would probably never get out of the wheelchair.

Okay, so I’m doing the Avastin for about three months, and my dizziness has pretty much gone away, except when I try to lie flat, so I just don’t try to do that, lol. I’m also getting some strength back. Slowly but surely, I start thinking that maybe God has other plans for me than what the doctors have been telling me. By the end of 2012, I’m thinking that I might be able to go back to work. I start talking to my doctors about that, and they say we will have to wait and see. In March of 2013, my doctors finally released me to go back to work. I was still doing Avastin every 3 weeks and would work on the day of treatment.

So far, I have proven the doctors wrong on all counts. I am walking, working and most importantly, alive! In June, my doctors decided to continue with the Avastin treatment for another year. My life was settling in to what I like to call a new normal. In May of 2014, they decided to discontinue the Avastin. I was in remission! Yeah! I was still being monitored by having a CA 125 every month and scheduled PET scan every 6 months.

I had my scheduled PET scan in October of 2014, and it wasn’t good. The cancer was back with a vengeance, and this time, I had fluid around my right lung. Because of that, my lung capacity was only 40% in my right lung. I had to go to the emergency room to have the fluid drained. There was over a liter of fluid, and two weeks later, they drained another liter. This time though, they punctured my right lung, and I ended up in the hospital for six days. While there, I had a PleurX drainage tube placed in my right side. When I got out of the hospital, we set up chemo again. Only two drugs this time around, but they made me very sick. I went from 180 lbs to 128 lbs. After two months, we got the proper dosage of nausea meds, and I could finally see a light at the end of the tunnel. My chemo was set up for six months. I finished in April of 2015.

After 8 months, I went back to work on June 11th. I am an elementary school custodian. Not an easy job, especially with half a lung, lol. My doctor calls me his miracle patient and tells me that my attitude has a lot to do with why I keep beating the odds. I tell him, and anyone else who will listen, that it’s all God. Always has been, always will be. They tell me that I will be on some sort of chemo for the rest of my life, and I’m okay with that. If it keeps me from being sick and incapacitated, I’ll do it. I’m not giving up until God tells me it’s time to go home. Until then, I will praise Him in the good times and in the bad times. My life song is “Strong Enough” by Matthew West. It says it all. If you haven’t heard it before, I would recommend that you give it a listen. God bless you all.