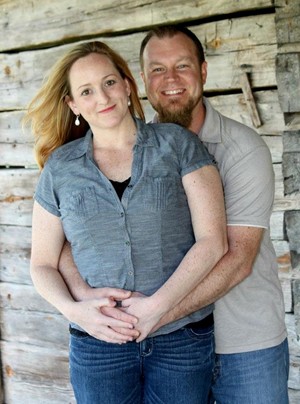 I stumbled across the Fight Like a Girl website when I was diagnosed with endometriosis and was trying to find someone, anyone, that could understand and appreciate what I was going through. The stories I have read over the past year and a half have been so encouraging and have been a true testament to the strength and fighting spirit that we women possess!

Now to my story! I am 39 years old and am very blessed to have two beautiful, healthy children. Unfortunately, many women with endometriosis never get that opportunity. My endometriosis was actually caused by my c-sections. Neither of my doctors told me about the possibility of cross-contamination of endometrial cells during caesarean birth, but I have come to find that it happens quite often. About four years ago, I started having very painful periods and passing large clots during my monthly cycle. I went to several doctors, but none of them could tell me what was causing the pain. I had one doctor tell me that she would perform a hysterectomy, but if she did that she was taking ALL of my female organs, not just my uterus, regardless of what was causing the pain. I was not ready to do that, so I kept trying different doctors in my pursuit to get answers.

In May 2011, I was diagnosed with adenomyosis (endometriosis of the uterus) and the doctor scheduled surgery to remove my uterus. I was so excited about finally alleviating this pain that I was now experiencing two weeks out of every month. My first cycle after my surgery was awful; the surgery had not helped at all. I called the doctor’s office three months in a row and they kept telling me that this was normal and the pain would eventually go away. By January 2012, I couldn’t take it anymore. The pain was getting progressively worse. I demanded to see the doctor for a follow up. He did an ultrasound where he saw a “small” liaison around my pelvic bone and recommended that I see a general surgeon (This was the first ultrasound that had been performed during this journey). In February 2012, I had surgery number two. Again, I was thrilled about not having to deal with the excruciating pain every month. After the surgery the surgeon said, “I’m sorry, but there wasn’t much I could do. I wasn’t prepared for what I saw when I got in there. You have endometriosis everywhere. It has attached to your pelvic bone and your abdominal wall. You need to see a specialist and you will need a plastic surgeon to assist with the surgery.”

I was devastated and started sobbing. You could tell he felt horrible and he said, “I did remove a 10 cm tumor and I hope this will help with the pain until your next surgery.” I had just had my second surgery in less than a year, and he was already talking about number three?!! So, here I go again, on the hunt for a doctor. I found one who was going to perform my next surgery. He said this was the worst case of endometriosis he had ever seen (he was about 70 years old), and that he was going to review my case with the medical board. Long story short, I didn’t feel good about him and decided to seek out yet another doctor. That’s when I found my miracle, Dr. Frances Lake. He had every test known to man performed on me, but it was because he wanted this to be my final surgery. He wanted to get it all in one shot. He and Dr. Ed Abell (plastic surgeon) performed surgery on me exactly one year ago. They removed a softball sized endometrial tumor from my abdomen, removed part of my pelvic bone, my ovaries, and fallopian tubes.

The endometriosis had actually grown into my pelvic bone!!! I have mesh in my abdominal wall to help fill the void that the tumor made. The surgery took approximately five hours and I have a new battle scar that stretches from hip to hip. After the surgery, both doctors said, “I cannot imagine the amount of pain you have dealt with over the past three years.” Now that I look back on it I too am amazed at how strong I was and how hard I fought. I never missed work due to the pain, never missed a family function, and put on a “strong face” for my kids.

I know there are so many women out there fighting their disease daily, that are putting on their “strong face” at home, at work, in front of family, friends, and strangers. To all of them, I say, “keep on fighting” and “listen to your bodies.” If a doctor tells you that you are “imagining your pain” or that nothing is wrong, find another doctor! No one knows your body like you do. In closing, I just want to say, “don’t lose hope fellow warriors.” I have been pain-free for a year and I finally have my life back!