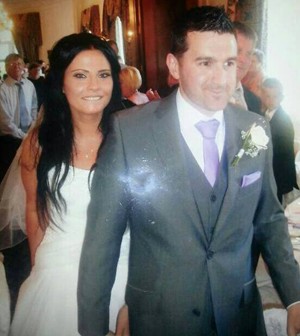 2013 was supposed to be the best year of my life. I was getting married to my best friend and my soul mate on September 14th in Spain and I was so excited to be a wife!! But everything changed when on January 2, I was diagnosed with stage 2 kidney cancer. I’m only 31 and had never thought this would happen to me. Even when I was in the hospital getting tests on the lump that had suddenly appeared in my stomach the night before, I never ever thought they would find a 15 cm tumor on my kidney. Ten days later, I had my kidney and several glands removed.

My recovery was horrific. I had so many complications; my spleen was nicked during the operation, and I was bleeding internally for two weeks before being rushed back to the hospital with septicemia. I had a second operation to drain blood from my abdomen and a drain in my back for three weeks. Another infection followed, and I’m now waiting on surgery to fix a huge hernia and undergoing treatment for a large ulcer. From January to March 2013, I spent 11 weeks in hospital. I was so happy the day I was finally discharged.

On 12th February, I was told the cancer had spread to my blood vessels and my diagnosis was changed to stage 3, that the chance of regrowth was very high and how hard it is to treat kidney cancer. I can barely remember the meeting with the doctor. It was like a dream. I just needed to leave the doctors office, I didn’t want to listen to what I was being told.

We were told in March that a wedding abroad was a no-go! So we cancelled our beautiful dream wedding and reorganized a wedding at home. On June 6th, I became Mrs. Kelleher. It was honestly the best day of my life and I now get to spend the rest of my days with the man who has kept me going for the last few months. I’m a lucky girl!

A follow up scan showed that there is currently no sign of the disease in my body. I know each clear scan is a God send, and each time I feel like I’ve won the lottery! So for now it’s just a waiting game. Waiting and hoping and praying it doesn’t come back, and if it does, I’m strong enough to fight it off for a very long time. Some days I feel hopeless… like I’m honestly waiting to die….. other days are good and I feel like giving cancer the two fingers and saying, “you can try your best, but I’m going to win!.” Today is a good day!