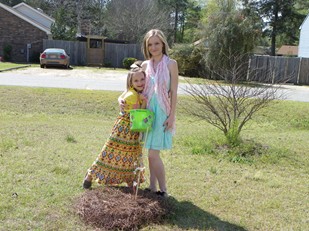 I woke up a few weeks before my 12th birthday and just wasn’t feeling well. This continued for a month or so and I began having a lot of pain every time I would eat and would throw up everything I ate. My parents took me to the ER countless times, almost every pediatrician and doctor in our town. No one could tell us what was wrong.  They decided I was just anorexic and it was all in my mind. By this time, I had went from an 85 lb chunky and athletic 12 yr old to a 58 lb child who couldn’t walk anywhere because I had seizures from being so tiny. I was sent 4 hrs away from home to Atlanta, Ga to their children’s hospital. When I got there, I finally heard the diagnosis. Superior Mesentery Artery Syndrome. What in the world is that?, I thought. Well, it is when the mesenteric artery literally kinks your duodenum ( small intestines ) like you would a water hose. It doesn’t allow anything to pass through so you vomit up any and everything you eat and essentially this causes your body to starve itself. I was relieved, I finally had an answer, or so I thought. The doctors there said if I got a NG tube and gained some weight I would be fine. So this is what we did. After a few months and no real weight gain I was switched to a PICC line and had TPN feeds.

Of course, it didn’t help either, so back to the NG tube. After a 109 day stay in Atlanta they discharged me with a kinda good luck we hope you don’t die diagnosis. I still was in constant pain. I still couldn’t eat and at times I wanted to give up. I spent many days back in the ER from the pain. On one of my visits they called a pediatrician in who happened to be friends with a surgeon in Macon, Ga. He looked at my diagnosis and said I think Dr. White could really help. My parents immediately made me an appointment and I was soon in the car on my way to Macon. Dr. White ran his tests to confirm SMA Syndrome and scheduled my surgery for January 20, 1997. Surgery was scary but they successfully moved my intestine away from my artery and I was on my road to recovery finally. I lived life normally then. Could eat anything I wanted and no pain. That is, until mid September hit and all the symptoms were back. So, back to Macon I go. My second surgery was scheduled for September 29, 1997. This time I had aduodenojejunostomy. This created an alternate opening in my intestines and rerouted where food should go. This time I didn’t recover as much. However, I was then on the way to living life as normal as I could knowing I have a disease that won’t ever go away. Everyday since that day in 1996 has been a struggle for me, but it’s a struggle that’s all been worth it.

Today, I am a happy and somewhat healthy almost 29 year old. I am still really skinny ( I’m about 90 lbs and 5 foot 2 in tall. ) I still have SMA Syndrome and always will. There is no cure. Doctors only try to make you comfortable and manage your symptoms. I still can’t eat a full meal and still have at least 30 mins of pain after anything I eat. I’ve also since had a child who is 8 years old and she is the reason I get up every day. I have endometriosis and I get chronic migraines. Despite all that’s happened to me and the countless times I have asked God why me, I plan to never just lay here and give up!