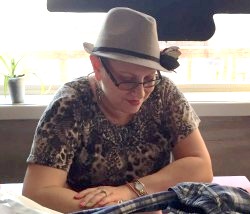 On January 2, 2015, I had a routine mammogram. The following Monday, I was called back for a repeat mammogram/sonogram, which I did that Wednesday. That Friday, I met with the best breast surgeon in Queens, who sent me for a biopsy on Monday, January 12th. On January 15th, I received my diagnosis.

At that point, it was thought all I would need was a lumpectomy and radiation therapy. I had the lumpectomy as well as a sentinel node biopsy on January 28th. While I was on the table, my surgeon didn’t like the way the sentinel nodes looked or felt, so she did a frozen pathology right there and then. Both of them came back cancerous, and I was upgraded to Stage 2A. After having the drain removed, I developed edema, which took about a month to resolve. On February 6th, I received the final pathology report which said that 9 of the 18 nodes removed were cancerous and that my surgeon didn’t get a clear margin of error.

Before starting chemotherapy, I had to have a port inserted because my veins are not the greatest. I started chemo on March 2nd. I had 4 rounds of A/C. I also received the booster shot after each round. After my first two rounds and even with the booster shot, my white blood cell count plummeted. I was lucky enough not to land in the hospital. I was able to return to work at the end of March.

In mid April, I contracted two upper respiratory viruses and was hospitalized for four days. I started Taxol at the end of April and completed two rounds. I then developed pneumonia, but again, no hospital stay. I took three weeks off and then started Taxotere. I completed two rounds and then developed an infection in my port, and it had to removed. I had a PICC line inserted, which lasted about a week before becoming infected. It was removed and another port was inserted.

In mid July, I was diagnosed with lymphedema. At the end of the month, I developed a UTI and was hospitalized a second time. I finally completed chemo on August 3rd. Because my breast surgeon didn’t receive a clear margin of error, my doctor did have to perform more surgery. While discussing my options, I decided to have a bilateral mastectomy, since it gave me the best chance of never having a recurrence of breast cancer again. I had a bilateral mastectomy with reconstruction on September 9th.

I’m now almost three weeks post op, and I had 2 out of 4 drains removed. The other 2 are still draining large amounts, 20-25 ccs each time. This coming Wednesday, I have to have a debridement to further my healing process along, so I can finish being filled and start radiation. It’s been a long nine months, and I still have a long road to go. Besides radiation, I will have to have two more surgeries: one to put the final implants in and one to have my ovaries removed, since my cancer likes estrogen. Right now, I’m still in pain and still healing. I was hoping to go back to work, but that doesn’t look it’s happening. Sigh. I’m getting bored just sitting around doing nothing. So that’s my story so far. Thanks for listening/reading.