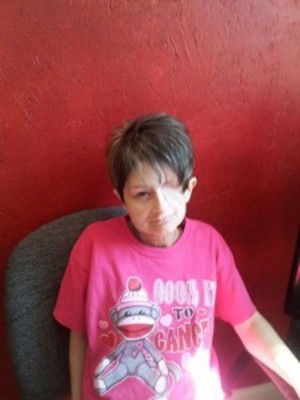 My name is Amanda Presley. I am 32 years old. I was born with bilateral retinoblastoma. I had my left eye removed at six weeks of age. I underwent two years of chemo and 30 rounds of radiation. I was in remission!

At 12 years of age, I found a lump in the eye orbit where my left eye had once been. My prosthetic eye wouldn’t fit right. I made an appointment with my previous oncologists and sure enough the cancer was back in a different form. This time I had osteosarcoma, a result from having the radiation when I was a baby! I had to have a 16 hour surgery for the removal of my orbital bones, as well as half of the roof of my mouth, along with my sinuses, and anything else in that area. I also had to have chemo every week for two years! I was now in remission once more!

Now I am 32 and yet again I battle this beast known as cancer. I was diagnosed in January. I now have squamous cell carcinoma on my tongue and throat. This being another result of having the radiation when I was a baby. I have underwent 35 rounds of radiation and three chemo treatments so far. I have a feeding tube in and had to go seven months where I couldn’t eat or drink anything by mouth.

In March I was in the ICU for 11 days and on a ventilator for nine of those days due to pneumonia from aspiration of fluids. My prosthetic pallet would no longer fit due to the fact that I had lumps in my mouth and they had to pull all of my teeth for the radiation. They told my family that I had put up a good fight and the best thing to do was to take me off the vent, the fight was over. The most the could do was place a trach tube in to help me breath, but it would most likely never come out. However, my mother knew I was a fighter and always had been. She pulled me off the vent and gave me a chance to breath, and guess what?? I FIGHT LIKE A GIRL FOR MY LIFE! I am here today to tell you that no matter what NEVER GIVE UP! My recent scans show major improvement, but the fight isn’t over yet! 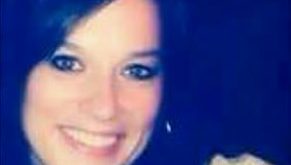