Home / Articles / Get Informed / What to Expect: Fine Needle Aspiration

What to Expect: Fine Needle Aspiration 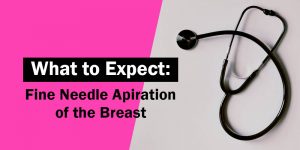 On May 30, 2018 after having a diagnostic mammogram and ultrasound, I was directed to have a Fine Needle Aspiration of my left breast. The doctors told me that the lump in my breast was not likely cancer. They told me that for women my age, 35 years old, it is usually a cyst.

For the Aspiration, they brought me into a low lit room where there were four nurses and one doctor. They told me to lay down and put my hands over my head. Then they prepared me for the procedure by numbing my breast. Then, one nurse put the ultrasound wand over my breast while the doctor inserted the fine needle in hopes of collapsing what they thought was a cyst at the time.

The way it was explained was that  if the fluid was not bloody and the lump disappeared, there would be no need for any other testing. If the fluid did appear bloody and the lump didn’t disappear, then a sample of the fluid would be sent out for testing and a referral to a breast surgeon or radiologist would be given. However, if no fluid was withdrawn, it would suggest that the breast lump is solid and a sample of it would be collected to check for cancer.

After trying a few times, they confirmed my worst fear – nothing was coming out. At this point, the nurses were trying to keep me calm by carrying on a conversation. It is important to note that before going in for this procedure, I made it clear that if nothing was withdrawn, I wanted a biopsy right then and there. At first they suggested I should come back a different day if I needed one, but I refused to leave. I had to wait a while as they got the paperwork and what they needed from my doctors to do the biopsy that day.

Finally, after what felt like forever, they let my mom come in the room. I was still crying and they told my mom what happened while I was in there. Before leaving and getting my clothes back on, the nurses gave me an ice pack and told me to take Tylenol if I was uncomfortable. Before I could leave, I had to have one more mammogram because during the biopsy they put a stainless steel marker of where they took a biopsy and needed to make sure that they could see it on the mammogram. This is done so doctors or surgeons know where to go if the results of the biopsy are cancerous or precancerous.

After I got home and the numbing medicine wore off, and I was in some discomfort so I used the ice packs and Tylenol. The next day, I woke up and I had some bruising on my breast.

Little did I know, that a few days later my fear would be confirmed and I would be starting my breast cancer journey. Always, listen to your body. Never wait. Get checked as soon as you can.

Previous What to Expect: Colectomy