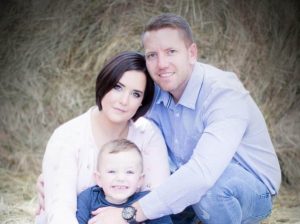 At 28 years old, I found a lump on my breast. It was a week after we celebrated my son’s birthday. I wasn’t even thinking that it could be cancer, but still, I decided to have it checked out. My doctor did a biopsy, then called me into his office to discuss the results. As I sat in front of him, he looked at me with tears in his eyes and told me I had breast cancer.

I was so shocked and I didn’t know what to say. I just started crying. He hugged me and assured me that we would get through this together. He also said that he first doubted doing the biopsy as I was too young and it was almost impossible for it to be cancer. Luckily, he did do it in the end. I immediately phoned my husband, but he didn’t answer as he was going into a meeting. I sent him a message saying he must come to me….it was cancer. He rushed to the hospital and went with me to go have a mammogram and sonar.

That night, when I arrived home and looked at my little boy, everything suddenly became a reality. My first thought looking at him was that he was going to grow up without his mommy and he wouldn’t remember me as he was still so small. During the next few days I came to terms with everything and decided I was going to fight this. It was time to be positive and get my mind right. Negative thoughts weren’t going to get me through this. I prayed about it and got the strength I needed. I was going to fight this cancer with the help of my faith, family and friends; I had an amazing support system.

I had surgery to remove the lump. During my recovery, I was sent for an MRI, and they found more cancer. The doctors decided to leave the cancer and give chemotherapy a chance to shrink the tumor. My oncologist advised me to go to a fertility clinic, where I had to have my eggs frozen as the chemo could kill all cells and could make me infertile. These eggs would at least give me a chance of more kids when the time was right.

On my first day of chemo, I remember sitting in that chair looking at all the other patients around me. Some looked very sick and fragile. I knew that soon, I would look like that too. As I looked at my husband, I realized how hard it must be for him to be here with me and realizing this is what I would look and feel like soon. The night after my first chemo, I got very sick and had a very bad fever. They decided to admit me into hospital and found that I had a very bad infection from my previous surgery. I ended up staying in the hospital for 13 days.

When I finally got back home, it was time for my next chemo. I felt nauseous just thinking about it! I went through six months of chemo. During that time, I tried my best to be there for my boy and be as normal as I could around him despite feeling terribly ill. Halfway through my chemo, we lost my father-in-law. He passed away suddenly, and I remember thinking…why him? Wasn’t it supposed to be me? I was the sick one, not him. Once again, my heart broke into pieces knowing how hard all of this was for my husband. While he was trying to support me and carry me through my chemo, he had his dad die in front of his eyes, and he couldn’t save him. The day after the funeral, I had another round of chemo. It just doesn’t stop. By this time, I had already lost every hair on my head and had to start wearing wigs.

A few weeks before my last treatment, my oncologist informed me that I would be having a double mastectomy after I finished my last chemo. It’s quite an emotional experience to deal with. This shocked me a bit, but I realized I had to do whatever was necessary to prevent the cancer from coming back. I went in for the mastectomy and was lucky enough to have great doctors, and they ended up doing reconstruction at the same time. The healing time was about two months, and all went very well.

After a while, I started feeling sick and struggled with chest pains and shortness of breath. The doctors first thought I had an infection in my chest, but discovered through a CT scan that I had fluid on my lungs. This eventually led them to discovering that my heart was weakening. They said this was a side effect of the treatment I was still going through. It happens to some patients but not all. I was then monitored by a cardiologist and put on medications to try to strengthen my heart. Luckily, after a few months, my heart was starting to strengthen.

It has now been almost exactly 5 years since my diagnosis. Since then, I have had 2 more follow up surgeries, but my scans are all clear and show no signs of cancer. Although I am still on some treatment, I’ve been able to carry on with my life living my “new normal”. My son will be turning 5 in a few months, and I am grateful to be able to be here with him to celebrate. I honestly did not think I was going to make it this far. I am truly blessed with the best doctors around me, as well as a son, husband, family, and friends who have been super supportive throughout this journey.

We have since decided as a family that it is just too risky for me to have another child. I’m truly thankful to God for blessing me with a son before the big C came knocking on my door. I will always live with the fear deep inside me that the cancer will return, but I know I will then get through it all again. I have learned so much through this journey, and I am grateful.