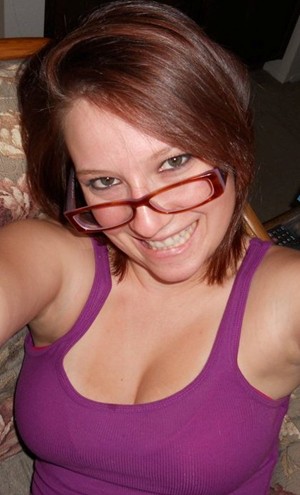 My name is Tracy, and my story is a long one. I was a late bloomer, as they say. I did not start my period till mid-high school (2002). I was vomiting and in so much pain in the middle of  my classes. I dealt with this pain for years, till it became so debilitating on my body and mind that I would black out from the pain and exhaustion.

My doctors told me I was having stress migraines and prescribed me Zoloft. It was not working and I became extremely anemic. After a year (now 2008) of this pain and suffering, I was sent to a specialty OB/GYN. He was absolutely horrible but diagnosed me with severe endometriosis and set me up for emergency surgery. All of the sudden, I had less than a week to understand exactly what was happening to me. I had never even been sick or in a hospital for anything before. I was extremely scared. I had my first surgery in January 2008. I was in pain from the surgery for 3 months!!! I could barely get out of bed to use the restroom. I constantly needed help. During this time, my father left my mother and I decided to move back home because I could not afford rent and my mom needed me

The doctor I was seeing at the time put me on Depo-Provera shots every 6 weeks. I went from 118 lbs. (I’m 5’7”) to 165 lbs. within 3-4 months. I was diagnosed with a thyroid disease, severe anemia, and pre-diabetic; all from this simple little shot. I became so depressed that I took a leave of absence from my job, which I absolutely loved, for a very long 6 months. My body was completely screwed up and I didn’t even recognize myself. During those 6 months, I was able to gain control of my body again. I stopped the shots after three months, followed strict diets, and took the necessary medications. I lost all the weight, the thyroid disease and pre-diabetes disappeared.

I returned to work only to be assaulted while on the job, which physically disabled me. A few months after that (now in 2010), my new and completely awesome OB/GYN (the 5th one) said I needed another surgery for the endometriosis because it had spread to my intestines (doctors thought I had IBS,  and then Crohn’s). She insisted I see an oncologist, he was very eccentric and had suffered from throat cancer.  She recommended I see him before the surgery because she only performed surgeries with his help. After speaking with him, I got over the thought of a cancer doctor helping with my surgery, it made a lot of sense to me. Endometriosis is like a cancer; it spreads and spreads and causes intense pain.

The surgery was awesome! I had almost no pain, and was up and walking around 2-3 days after the surgery. They realized, while I was cut open, that the previous doctor had left my urethra out of place and that I had a tilted uterus. Despite the news, I felt great!!! It was great to know that I finally did not have to worry about my endometriosis, and I could deal with my workers compensation case from the assault.

I am now 28 years old, its 2012, and the pain is back. I fear daily that I will never be a mother. My boyfriend is not ready to have kids yet, even though he knows my situation. I have been battling endometriosis for almost ten years now. My greatest fear in life is that I will never experience pregnancy, child birth, or being a mother to my blood related child. I currently rely on Seasonique. I cannot stand the side effects of all the possible medication, and am not ready to lose by having a hysterectomy. I have taken so many pain medication between my endo and work comp injury, I was recently diagnosed with Gastroparesis (not a very fun disease at all). A normal stomach works at a minimum of 75% an hour, mine was only working about 18% an hour. So, not only do I refuse to take more pain pills, but my body cannot handle it.

I AM AN ENDO WARRIOR AND I WILL SURVIVE AND FIGHT TILL THE END BECAUSE I FIGHT LIKE A GIRL AND ALWAYS WILL!!!