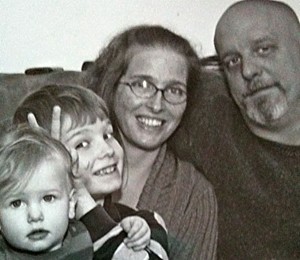 After a month of calling around to try and find a dermatologist, I decided I couldn’t wait any more. I contacted my general practitioner to at least have someone look at the mole that had seemed to change overnight.

Once at the dermatologist’s office, the PA agreed that the mole was extremely angry and needed to be removed immediately. He did a deep incision in order to get a really good sample for testing. The PA spoke to me about the possibilities but suggested I not jump automatically to melanoma. He said he would call on Wednesday or Thursday of the following week with the results. Being a holiday weekend, I knew it was gonna be a long one.

I did fairly well all weekend believing they weren’t going to find anything. I even managed to get some sleep and put it out of my mind for the most part. Tuesday came and most of the day passed without too much stress about it. While sitting at home with my boys, a number came up on my iPhone that I didn’t recognize. It didn’t occur to me that it would be the dermatologist with my results as they weren’t supposed to call until Wednesday or Thursday, then I realized the same number popped up on my home phone and reality sunk in. They were calling earlier than planned.

The call started normally enough but within minutes my life had changed…I had melanoma stage IIb. It was nodular melanoma as we found out later. After a couple of breakdowns and lots of tears, I decided I had things to do and dying of melanoma was not one of them!!

From that moment on, my life became about appointments; appointments for surgery, follow-ups, treatments, infusions, injections, skin checks, etc. 2011 was a blur of doctors, nurses, surgeons, IVs, hypodermics, side-effects, and anything else that came with such a diagnosis. And during all of this, I was still the mother of two little boys and a wife to a very wonderful man! Because of them, I had the courage to stand tall and fight my cancer and I will continue to fight for as long as I can.

UPDATE: Tiffany learned last month (April 2013) that the melanoma has returned as stage 4. She is now Fighting Like a Girl harder than ever before. Please keep her in your prayers and feel free to leave her some words of encouragement below.