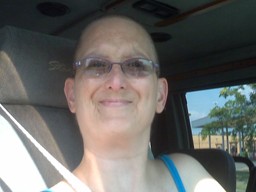 I am a 46 year old ovarian cancer survivor. I was diagnosed in 2008 with stage 3C ovarian cancer. I was 43 at the time and I had just gotten over the flu in 2007.  I started having some pains in my side that caused me to double over and actually cry. My youngest son and my boyfriend were both here with me when this had happened. I originally thought I was gaining weight because I was getting too heavy around the mid-section and figured “ok, I will go on a diet and lose weight”. Well, it turned out that wasn’t the cause at all.

After having the pain for 2 weeks, my boyfriend suggested that maybe it was cysts – that I had previously had – coming back. I made a doctor’s appointment and went in.  He ordered an ultrasound and it showed 2 cysts – one on each ovary.  On the left one, it was a follicular (water filled) cyst and, on the right, it was a porcupine looking one that had started squeezing my ovary so much that it cut off the blood supply and caused me to keel over in pain.

By the time I made it to the ER, my son had to carry me in. They gave me morphine to help ease the pain and it didn’t do anything. Later the next morning, they admitted me and the next day the doctor did a removal of the right ovary and sent it and the cyst for a biopsy.  A few days later I got the news that it was cancer.

He then sent me to an oncologist who deals with this area and after he examined me he said that I was stage 3C. It had traveled to my pelvic region.  He scheduled me for surgery and what was supposed to be only an hour or 2 turned into 4 hours. He removed 10 – 15 lbs of tumor which went from my pubic region to my diaphragm. He moved every single organ in my body and even removed some of my omentum and did a bowel resection. If he had had to break my breast bone it would have been stage 4 but he didn’t have to go that far.

I’ve been in treatment 3 times. I’ve had 2 remissions and I just started my 3rd treatment cycle last week after being off since July. My remissions will be shorter as time goes by but I am doing what I want to do now with my life. I go out to eat with friends.  I spend my money the way I want. I take care of myself. I am truly blessed to have a great group of sisters that care about me as I care about them and we are all there for each other no matter what.

I want everyone to know that there is help out there.  If you’re not feeling good and you think it’s just a need to lose weight, get it checked out to make sure. This is the SILENT killer and if left undetected it will kill you….