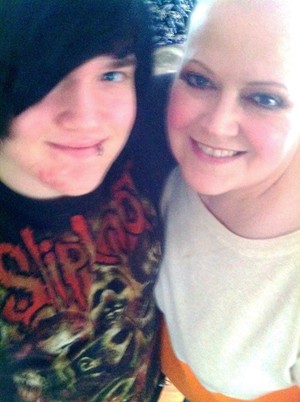 My name is Terry Foltyn, and this is my story. I’m a 48 year old single mother of a 16 year old son. Ten years ago, I had my very first mammogram which showed abnormalities in both breasts. After a very painful biopsy and recovery, it was determined that the abnormalities were simply calcifications, and I was fine.

Unfortunately, I let that one painful experience scar me emotionally. I did not go back for a mammogram until last November, after I had found a small lump in my left breast. Two days before Thanksgiving I was diagnosed with Stage 2 breast cancer. I was devastated. All I could think about was the fact that my son had just lost his father only three years prior, and now I could possibly die and leave him alone. That was a brutal realization.

Two weeks prior to Christmas, I had a mastectomy. During surgery, it was determined that the cancer had moved to my lymph nodes as well, so those were also removed. I started an aggressive chemotherapy on  January 4, 2013, which has been one of the hardest things I have ever gone through. I went biweekly for the first four infusions, then every three weeks for the last four infusions. At times I didn’t think I could make it through.

The first four sessions brought constant sickness and dehydration. The last four sessions included pain and constant migraines. I just finished my last chemo infusion on May 17th. I can honestly say that my faith in God, my son’s love, and the constant support from my amazing friends, and family, are truly what pulled me through it. Now, I am about to start radiation treatments later this week, but I know I am almost completely through the storm. I actually see the light at the end of this long dark tunnel that I’ve been trapped in for the last seven months!

Also, I’ve found a purpose in all of this. I’ve made it my mission to talk to others about the importance of regular self breast exams and mammograms. I’ve been completely open about my cancer journey with anyone who would listen. When I lost my hair, I found the courage to not cover up, but rather to go bald and show the world that, yes I have cancer but I am a fighter and I will beat this! I’ve posted photos and constant updates on Facebook about my treatments, and I will talk to anyone who approaches me about my baldness and cancer. As a result, I’ve met some wonderful people out there, and I hope I have helped at least one or two people in the process myself! Never-Ever Give Up!