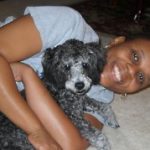 Hi my name is Stacy Scott and I am 38 years old and was diagnosed with stage 2 invasive ductal carcinoma breast cancer in December 2009. The margins were not clear so the vascular surgeon recommended chemotherapy first. I was doing a monthly exam and I felt a lump in my right breast about the size of a dime. I was also having pain in my chest area before I discovered the lump. The doctors that I went to sent me for an EKG and I found out that I did not have heart trouble. I went to my OBGYN doctor and had my annual mammogram and told him about the bump I found in my breast and I also told him about the pain I had been having in my chest. He found suspicious areas in my right breast and sent me to a facility for more
thorough diagnostic testing.

Well the lab techs at the facility said “I don’t see what the doctor is having such a fit about”. They told me that it was just a benign cyst in my right breast and to come back in 6 months because they saw an area in my left breast that needed to be checked. I went back home and less than a month later the area in my right breast had grown bigger and started to really hurt more. I called my OBGYN doctor and told him what was going on and he scheduled me to come back in for another ultrasound to see what was going on. If I would have waited 6 months the outlook would not have been that great. The area in my right breast had changed and he sent me to a vascular surgeon for a biopsy. I went for the biopsy and the doctor there tried to aspirate the lump with a needle and all she was getting out of the lump was blood. She looked at me and said, “I’m not going to pussy foot around with you, there is about a 90% chance that you have cancer.” All I could do is cry and I told her that I’m not taking chemo. She said that I had no choice and that if I didn’t the outlook wouldn’t be great. I told her that I did have a choice and that God has the final say so in everything that was going on. She said you’re right.

January 2010 I had a biopsy done where the vascular surgeon removed three sentinel lymph nodes and put a power port in right above my left breast. All nodes were negative and I thank Jesus for negative nodes. I started chemo January 26, 2010 and the oncologist started me out with 4 treatments of a cocktail with adryomycin and cytoxan and ended treatment with 4 treatments of taxol. The journey with the chemo was not easy because I lost a full head of hair going into my second treatment. The third treatment is when I really started feeling the ill effects of the chemo. God carried me through this journey and I continue to walk with my Lord and Savior.

April 30, 2010 was my last treatment of chemo. May 2010 I demanded that my doctor send me to do a Pet scan and a bone scan because of the pain I was having after chemo. The tests came back negative and I thanked God again for His grace and mercy. June 4, 2010 I went in to have my right breast removed and I had less than a millimeter of cancer left in my breast and had almost 100% response from chemo. I did not have chest wall radiation and I can start to recover from chemo. I started tamoxifen July 18, 2010 and about eight days into taking tamoxifen I developed blood clots. I am no longer taking tamoxifen and currently recovering from the blood clots. I ended up changing oncologists, because of her interest in not listening to what I knew was going on with my own body.

I am still trusting in the Lord during this time of healing for me. My husband, 10 year old daughter, and 16 year old son were my biggest supporters in going through this journey. Thanks to girl power that I continue to “Fight Like A Girl”.