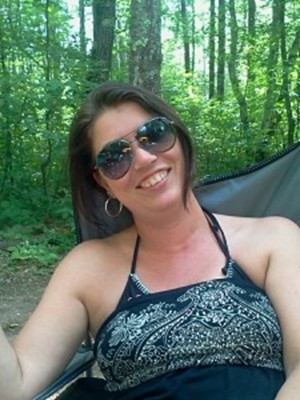 September is thyroid cancer awareness month, what better month for me to tell my story and spread the word. I wanted to write this not to get sympathy but for people to understand what an impact your thyroid has on your body. The easiest way to put it, as my doctor said, “Your body is the United States and your thyroid is the president.” I also have an auto immune disease called Hashimoto’s. I believe I have been misdiagnosed for at least 26 years of my life, with the end result being thyroid cancer. My thyroid was removed at the end of January 2013.  I’m currently seven months cancer free and I fight like a girl.

I went in for my yearly physical on November 8, 2012, and like most of us I will never forget that date. At the normal yearly physical this past year, my doctor was concentrating an awful lot on my neck. At that time I knew little about what a thyroid was, what it does, or where it was for that matter. I didn’t know that all thyroid numbers are not checked in blood work either for a yearly physical. My doctor’s office only checks three out of six normally. My doctor decided to do an extensive test (which my insurance company didn’t cover), we got the results back, and sure enough my body was producing antibodies. They should be under 60 and my great number was 1,276.

“What’s an antibody,” I thought? Just another thing I didn’t know, but it’s a sign of your body self destructing. The process began; extra blood work, ultra sound, specialist, biopsy (undetectable), second opinion specialist, surgeon, and the end result being surgery January 29, 2013, yet another unforgettable date. Surgery went well and the surgeon wasn’t too concerned with it coming back as cancer, it was a 20% chance he said. They did a biopsy after surgery. The surgeon was shocked and said, “Shannon it is cancer.” I was probably too drugged at the moment to comprehend what had actually happened. My parathyroid wasn’t working so my one day hospital visit turned into a three day visit. I was released three days later, able to go home to recover. I went through surgeon follow-ups, specialist appointments, blood work, thyrogen shots, and radioactive iodine all before the end of April 2013.

I reached out to the first specialist I was referred to in April 2013. I should have known better as she was the specialist that wanted to wait and revisit in six months, based off the undetectable biopsy before my surgery. I’m thankful I decided to get another specialist’s opinion and not listen to her advice. I kept telling them something was wrong. I found myself lying on the floor at night just asking God to take my life, as I didn’t have it in me to fight anymore. I reached out to someone that is now very close to me. He helped me try and focus, to get the strength, and to fight back. I’m thankful every day that he was there to pick me up when I was struggling. I started doing my own research, researching doctors in my area that specialized in auto immune disease and thyroid cancer. I ended up finding one and getting in to see her within a few weeks. The nurse checked my blood pressure a few times and said she will be right back. The doctor immediately came in and saw my blood pressure was at 188/122, I knew something wasn’t right. My body was screaming at me, so I found a doctor that was concerned and willing to listen. I’m thankful for finding a new specialist that isn’t concerned with my numbers, but what my body is saying. Since I have an autoimmune disease my thyroid blood work numbers are never correct.

I think surgery was the easiest part of my president being removed from my body. I am amazed to find myself searching for my old self. Not knowing who I am, I’m questioning myself about my life and who I want to be. The girl before my president was removed just doesn’t exist anymore. I still deal with this daily struggle, it’s a process of increasing medication every four to six weeks, as my numbers are still not right. I have learned to have patience throughout this process. Every day is a new day and I never know how I’m going to feel. I take one day at a time so I don’t get overwhelmed, frustrated, or break down for that matter. I can’t tell you the amount of joint pain, swelling, water weight, hair loss, anger, rage, frustration, weight gain, muscle cramps, brain fog, and lack of concentration I deal with, usually on a daily basis. That list is what I can remember, there are a few others but I will spare the details.

My disease has caused me throughout the years to be diagnosed with an abnormal white blood cell count, to have extensive tests done, be treated for ovarian cysts, abnormal menstrual cycles, miscarriages, one still born, pre-cancerous cells on my cervix, one reaction with hives, anxiety attacks, depression, fatigue, yearly bronchitis, multiple cases of walking pneumonia, unknown number of UTI’s , IBS, and iron deficiency. It has caused me socially and mentally an unknown number of childhood memories lost (minimal memories before age 12), numerous missed days of high school, numerous failed friendships, numerous failed relationships, one failed marriage, one failed engagement, years of missed work, unknown amount of lost income, unknown number of social functions missed, withdrawn from numerous family functions, withdrawn from family in general, many hurtful words said, and wrong decisions made. Most, but not all, of these symptoms I have listed I believe stem from my misdiagnosed autoimmune disease of hashimoto’s and low thyroid function. I do not have any children, not that my ex-husband and I didn’t try, but I think that my undetected autoimmune has lead to infertility as well.

I struggle daily, but push forward, wanting nothing more than to reach out and raise awareness. I want to help people avoid going through years of misdiagnoses, frustration and struggles like I have. So please learn how to check your neck, ask your doctor to as well during your yearly visits, and request all six thyroid numbers to be checked.