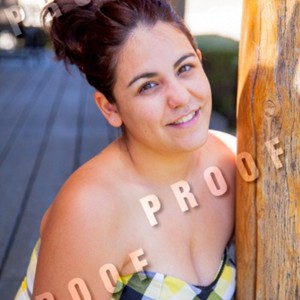 In September 2010, I was 20 years old, and my lower hip started hurting at nighttime. Only at nighttime would my hip hurt. Then in October my back started hurting, and then my legs. The pain would be so unbearable that I would have to take four aspirin at night to go to sleep, and heat up a water bottle and lay it on my back. I would wake up crying from the pain. But I couldn’t go to the doctor because my family had no insurance. In 2011 I had started another semester of college. One day my dad got approved for full work benefits, so we all got insurance. My mom had taken me to a few hospitals and I was diagnosed with several things; a sports injury, fibromyalgia, and finally the ever popular, “it’s all in your head” story. My mom graduated from nursing school the year before, she had a friend who was a doctor. She took down all my symptoms and then suggested I had mono (which is a kissing disease ), so she was going to give me a blood test.

After my blood was taken, she called me saying that my blood cells were outrageously high, as well as my white cells. She recommended that I see an oncologist. I wasn’t very medically smart. I assumed I was just going to get more blood taken and they were going to tell me that I had mono. By this time it was the end of July 2011, I had been through so much pain that I had been popping about four aspirin every night before bed, because that’s what previous doctors have told me to do.

She had also sent me for a CT scan. I didn’t know what the results were until I met this doctor. His name is Dr. Koster (He’s an awesome dude, I love him). We met with him and then the next week in early August 2011, I was definitely diagnosed with Hodgkin’s Lymphoma Stage 4. My neck was the size of Texas from the over-sized lymph nodes.

I couldn’t go to school that semester )it was supposed to be my last one). In the middle of August I got a lymph node biopsy that came back positive, so we started chemotherapy rounds of ABVD at the end of August. I was doing four to six treatments of that. I was supposed to be done around mid November.

Getting all those treatments lowers your white blood cell counts though so between treatments I would do chemo prep. Which was neupogen blood shots, every day in between treatments. I did lose my hair which made me miserable, all of it. I had my youth pastors wife shave my head.  It was probably one of the most traumatic things I have ever gone through. For most guys they just don’t understand this but I think the ladies will understand on this one.

Every time I went, I would go with one of my parents. I ate beforehand and then immediately after getting the IV I would vomit instantly. To this day if I smell saline solution I want to vomit, for me it has a smell and taste to it. Every PET scan I go to I have to have something over my mouth so I cant smell or taste it.

So in December 2011, I had seven treatments by this time. I was completely done on December 12, 2011  (it also took the longest it seemed like). I was announced in remission in January and sent to Stanford University in March for the confirmation.

I am still in CR and doing great. I now have finished school. I still need to graduate, I am not too far off. I did lose some friends in that process but have gained great ones for life. My doctor is one of the most amazing people I have met. He deserves a medal for having to deal with me all the time.

I want to be a model one day. I just did a photo shoot to start it off.  I am 23 this month, it’s been almost two years since I had cancer . My hair is actually curly now and to a length I like. I am getting my first hair cut since the shaving soon. I work at the local VONS, and I have a great boyfriend who loves me for everything I am, and I am a much better person. I am proud to say I fought like a girl and won. 🙂