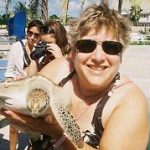 Oct 1996 I found a lump on my right breast. Of course, it was a weekend! I was fortunate to have a great primary female, woman’s doctor. She saw me Monday, recommended a breast specialist, & would not let me leave until I had an appointment made. I saw the breast specialist the following week & when I opened my dressing gown, she said “Wow, I can see it!” Needless to say, it was the size of an egg and because it had grown so fast [3 wks!] we thought it was a cyst. She tried to aspirate it, but was not satisfied & scheduled an ‘open biopsy’ the following week.

The most important part of this is to know that I had just gone thru an ugly divorce after 16yrs of marriage with 2 young female children, 11 & 14, which made me the single mom doing all this ON MY OWN! For any of you who know, info on breast cancer [most any cancer, really] in the mid-90’s was not as accessable as it is today. People still were hush hush about it. Anyway, a friend dropped me off for the outpatient biopsy & another friend was to pick me up when I was done [get the picture? I was alone].  As I was awakening from the anesthesia, the doctor came into the recovery area to tell me that she had removed ‘yada, yada, yada,’ carcinoma! Obviously, the “carcinoma” was all I heard & we had originally thought we were removing a cyst! At that point, 1/3 of my breast was now gone & I had to wait 3 days to hear the final blow: “No clear margins”.

Fast forward, I had genetic testing due to my Jewish Heritage. While waiting for the results, my mother started asking family members for history & by the time the genetic testing came back that I do not carry the BRAC1 or 2 gene, the family history had placed me as #9 in the family. At that point, I made the choice to have both breasts removed & reconstruction via the TRAM method. Remember? the DX was mid-Oct 1996 but we did not get to surgery til Dec 4. That was the first of what ended up being 7 surgeries & 8 hospital stays [6 stays @ 5days each, 1 stay 6 days & 1 stay 2 days]! The first surgery I turned BLUE on the table & they had to staple me back together. A few weeks later, they put me back on the table & finished what should have been 14 hrs in one surgery with my 2 new breasts & my tummy tuck too!

That’s what the TRAM reconstruction does. I then had multiple complications, leading to the many stays back in the hospital, including a life threatening blood clot [father died of a blood clot that moved when he was 46, same age I was upon DX & surgeries], debreadment of dead tissue and skin, a hole in my abdomen 4cm wide, 4cm deep & 6 cm in length. Nearly 2 years after the initial DX, I started to relax & had no more major surgeries or problems. Due to the surgeries, I had no chemo or radiation, but did take Tamoxifin which added 60# over the 60 months I was on the drug.

The good news, I am here to spread the word that WE CAN FIGHT THIS! I was actually more afraid of the blood clot than the cancer. I felt the cancer was something I could fight, blood clots on the other hand can kill within seconds. I witnessed that first hand when my father’s clot, which he had for 23 yrs, moved & killed him. Anyone ever being DX is an instant survivor in my eyes. We can make a difference, here and out there just by talking, being proactive, and letting everyone know that we can Fight Like A Girls and win. There is strength in numbers!

Thanx for listening – listening is something I do best now! 14 years and counting!