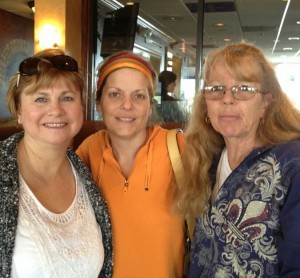 Last August, before I felt sick, I ran a blood drive through Mass General Hospital with the Blood Mobile and collected 30 pints of blood. The Drive was to “Replenish the blood bank that was depleted from the Boston Marathon bombing”. It turned out I ended up using 2 pints of blood less then a month later.

I was hospitalized last September 11th with severe abdominal pain. After several weeks I was diagnosed with necrotizing pancreatitis, had emergency surgery to remove part of my pancreas, had several blood transfusions, given my last rites twice and was on kidney dialysis. All my organs were shutting down. It was a day to day struggle just to sit up. I went almost 3 months without eating and lost 40 pounds. But, thanks to persistence of my doctors, nurses and therapists, I went to rehab for almost a month. It was disappointing to miss Thanksgiving, a family wedding, and a family funeral. I had to go back to MGH because I had IR drains that kept falling out.

Finally after being hospitalized for 3 months and 2 days (mostly in Mass General Hospital) I got to go home. I was like an elderly person. I could barely walk, and coughing and sneezing were excruciating. The visiting nurse came twice a week for a month. My brother-in-law said, “If anyone can beat this, it’s Sandie.” I had a better chance of dying than surviving.

It’s almost been a year of being nearly pain-free. I just couldn’t give up because I saw the pain in my families’ faces when they came to see me and didn’t want to be the one who caused it.