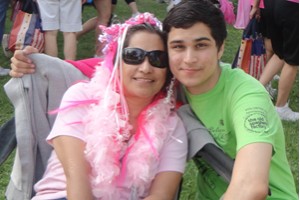 This is the story of my on-going battle with breast cancer that started in 2004.

I was 38 and diagnosed with Stage IIB invasive ductal carcinoma. I had found a lump on my right breast and because I did not have any insurance nor was I really worried about it being malignant. I had no family history of any cancer, so I waited a few months before I finally got a mammogram.

By the time I made it home, the doctor’s office had called asking me to return to the office right away. “That can’t be good,” I thought to myself. My doctor held my hand as he spoke and I remember thinking, “Wow, this really does happen, you really feel like you’re underwater and somebody is talking to you.” I was kind of in a daze, all I could think about was my three kids. The doctor referred me to a hospital where he had already made an appointment for me and wished me the best of luck.

Two months later, I had a Lumpectomy and lymph nodes removed. Only one lymph node was positive and radiation and chemotherapy treatments followed. I kept up with my 6-month mammograms and things seemed to be getting better since they were all clear. In 2007 I started getting a lot of back aches. The first doctor diagnosed it as sciatica and gave me some medications that seemed to help. A few months later, in October, the pain was worse and that doctor claimed it was osteoporosis. The following week I was in the ER with excruciating pain, I could barely able to walk, an MRI revealed a metastatic tumor in my spine.

My diagnosis was now Stage IV breast cancer with mets to the spine. The tumor had collapsed one vertebra and was halfway through another. The first step was radiation. In January 2008, I had spinal fusion surgery and although the doctors did their best, they were only able to remove 85% of the tumor. There were several complications after the surgery including pneumonia, infections, etc. I ended up spending six months in the hospital.

At home, I required round the clock care so my mom took an early retirement and took care of me. I was bedridden for a few months. A nurse came twice a week and a physical therapist everyday. Once I was back on my feet I started chemotherapy treatments. My body handled 18 months of chemotherapy and my doctor and I agreed on taking a break at the end of 2009.

I had scans every six months, 2010 through 2011 all was stable. In January of 2012 I started treatment with a chemo pill since there had been some progression shown in my last PET scan. The medication was working but slowly and my Oncologist switched me to iv chemotherapy. This one has been a little harsh and I actually had to spend a few days in the hospital in July because I was neutropenic.

Through everything I have been through, I have had a loving and supportive family, friends, wonderful medical staff, and God. I can’t imagine what it would have been like without them. My faith and prayers got me through the worst and darkest times of these battles and the months I spent in the hospital. Most of my days are good, even though I live with pain everyday I still try to enjoy life and family as much as I can. The bad days are few, but when they get to be too much and I start to feel like giving up, I just think of my kids and my grandsons. They are my main reasons to fight and try to squeeze every second of life that I can. Even though my diagnosis is Stage IV, I have vowed to Fight Like a Girl against this disease and hopefully live long enough to see my grandchildren graduate college!!

In January of 2010, my annual mammogram showed no problems. I was almost 58 years …